This profile is part of the Davis Name Study.

Nelson Davis (alias Nelson Charles),[1] was born about 1840 in Elizabeth City, North Carolina.[1][2] According to his wife, he was enslaved by a person surnamed Charles, and also went by the name Nelson Charles.[1] Primary documentation confirms that he used this name while serving in the U.S. military, and assumed the Davis surname around the time of marriage.[3] Church marriage records also show that he used the name, Charles Nelson Davis.[1]

Nelson was the second husband of Harriet Tubman,[1] a famous Underground Railroad "conductor" and Civil War spy and nurse, in 1869.[4]

During the U.S. Civil War, he served as Private in Company G, Eighth Regiment USCT. It's not certain but he may have been drafted. Harriet Tubman stated that he enrolled on 25 September 1863, and was discharged at Brownsville, Texas on 10 November 1865.[1] In 1866/7, he moved to New York after being discharged.[1]

Is Nelson your ancestor? Please don't go away!

ask our community of genealogists a question.
Sponsored Search by Ancestry.com
DNA
No known carriers of Nelson's DNA have taken a DNA test. 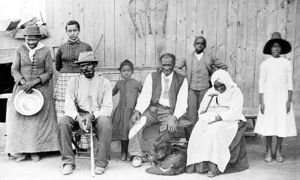