Nathaniel Davis was a Virginia colonist.

Nathanial was married to Elizabeth Hughes, and one of his daughters was Abediah Davis who married William Floyd.[1]

Nathaniel Davis was an Indian trader and possibly a Quaker. Nathaniel Davis, a Welshman and early settler in the region, made a large fortune by having choice river-bottom lands and trading with the Indians.

Oral/family tradition claims that his wife was a granddaughter of Chief Opechancanough, through his daughter, Princess Nicketti. While the Chief is documented, we have yet to find proof of the existence of a daughter Nicketti or her supposed mate, trader John Hughes.

Excerpts from "Floyd Biographical Genealogies" 1912 by N.J. Floyd were sent in 1964 to Broaddus and Pauline Burks from Clyde Campbell of San Antonio, Texas. He was a descendant of Samuel and Mary Davis Burks.

The Oft quoted book, "The Cabells and Their Kin", has a few lines noting kinship of the Burks, Cabells, Venables, Floyds, and a branch of the Davises due to their Indian blood.

Born 1655 by St Michael's Parish, Devonshire, England. It is said he came to Virginia from Wales, and was a Quaker. He is sometimes noted as Quaker Davis...
But, Lorene Martens in "The Complete Book of Immigrants, 1607-1776" suggests that Nathaniel was "reprieved for transportation for Barbados June 1671, London." She recalls seeing somewhere that he was jailed and transported for stealing tobacco. "On 8 June 1671 Newgate prisoners reprieved to be transported to Barbados: London."
This information was found on Ancestry.con

ask our community of genealogists a question.
Sponsored Search by Ancestry.com
DNA Connections
It may be possible to confirm family relationships with Nathaniel by comparing test results with other carriers of his Y-chromosome or his mother's mitochondrial DNA. Y-chromosome DNA test-takers in his direct paternal line on WikiTree: It is likely that these autosomal DNA test-takers will share some percentage of DNA with Nathaniel: 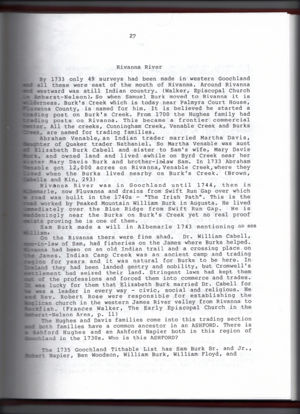 Wendy Browne
hello we share ancestor Nathaniel Davis, there is a mix up over on his profile. can you take a look and confirm I am seeing this right please?

he shows up in 2 profiles that I have seen, profile Davis-4322 shows him with the same person as his wife and his mother. that would be this profile Hughes-381. this version of him says his son John was killed by Indians

then there is another profile for him here Davis-1446 again showing his wife as Hughes-381. Elizabeth Hughes who was born 20 plus years before he was.

Bill Vincent Ph.D.
Davis-4322 is his son. Someone has connected Hughes-381 (his mother) as his wife. I tried to remove Hughes-381 as a spouse of Davis-4322, but the idiot project protection didn't allow me to do so.

There was no Nathaniel Robert Davis. Ancestry users invent middle names which seem to pop up everywhere. Davis-1446 should be Nathaniel Davis (with no Robert). The preferred name of Davis-4322 should be Robert Davis.

Kathie (Parks) Forbes
According to the "20th Century Cabells and their Kin," Nathaniel and his unknown wife had at least four children: daughters Mary (married Samuel Burks), Martha (married Abraham Venable), and one who married a Floyd, and a son Robert Davis, Sr.
posted Nov 15, 2018 by Kathie (Parks) Forbes
Barry Wood
That 1895 publication, insofar as it relates to the Davises, is worthless fantasy. Forget about ti.
posted Jul 26, 2020 by Barry Wood

Kathie (Parks) Forbes
A recent update of the 1895 "Cabells and their Kin", called "20th Century Cabells and their Kin" by Randolph Cabell says, "Mary Davis was the daughter of Nathaniel Davis and an unknown wife... Nathaniel Davis is said to have come from England or Wales to America. It is estimated he was born about 1658. It is not known who his wife was...
posted Nov 15, 2018 by Kathie (Parks) Forbes

Jillaine Smith
Detaching from parents; they had a son Nathaniel who married a different woman in Woburn,MA and raised a family with her in Charlestown, Mass
posted Nov 12, 2018 by Jillaine Smith

Jillaine Smith
Middle names during this era were pretty much nonexistent for the English. Which name is correct ?
posted Oct 25, 2018 by Jillaine Smith