His Anglo name was "John J. Davis," a name to which his grandson Wally Funmaker makes no reference whatever. His birth order name was Hagága, "Third Son." John consistently told the census takers that his Hocąk name was Kerejųsepskaga, which is from kerejųsep, "blackhawk" (the American swallow-tailed kite) (< kerejų, "hawk", and sep, "dark, black"); ska, "white"; and -ga, a definite article suffix used in personal names. The correct translation of this name is "White Blackhawk," although his grandson, Wally Funmaker, presented his name as "Black White Eagle," leaving open the possibility that he was known by another name as well. (Funmaker, vi)

Described as of medium height and build with black hair and dark eyes. (Draft Card)

Wally Funmaker recalls, "Black White Eagle (White Blackhawk), [was] a prominent Sky Clan medicine man who took great pride in his knowledge of herbal medicine. It was Black White Eagle, my maternal grandfather, who introduced me to Winnebago herbal medicine and mythology. As a young boy I would accompany him on his plant hunts across western Wisconsin." (Funmaker, vi)

Otherwise, he made his living as a farmer. (Draft Card)

"Shortly after my graduation, Black White Eagle died. I returned to Wisconsin for the burial. My mother, Cloud Visitor, instructed me to select the appropriate Bear Clan elder to bury him, since I was a Bear Clan member. I approached Walking Soldier who later became my first mentor. Walking Soldier oversaw the four night burial ceremony and the actual burial in the Winnebago traditional manner with appropriate honor. Walking Soldier became a very important part of my life from that point on." (Funmaker, vii) 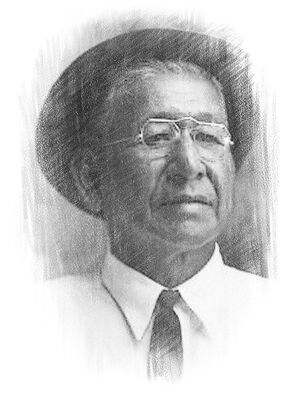