Sophia Ann Davison was born on 5 December 1841, the daughter of Gould and Matilda (Holmes) Davison. She passed away on 12 March 1885.

Sophia Ann married Leander George Sanford. He passed away on 5 March 1884. Both were buried at Habitant Cemetery.

Together they had three children:

"A 'Story of my Life' written by Florence Jane Sanford, daughter of Leander and Sophia Ann, is in the hands of the family and gives a great insight into the lives of her parents and herself. I wish I could print it in its entirety but its length, some 10,000 words, makes this impossible. She tells how her father inherited a good farm of 100 acres and although he was a rough and somewhat profane man, he was a good provider and when her mother insisted on a home of her own, he built a new 6 room cottage across the street from the old homestead. She also tells of her father teaching her to make 'pothooks' as a basis for penmanship. Of her mother she says, 'she was a gentle refined woman who gave her children much of her time teaching them songs, their ABC's and little rhymes.' At the age of 5 years and 4 mo. Florence could read from newspapers and remembers going to school dressed in white cotton stockings, high button shoes, a true tartan scotch plaid of fine cashmere trimmed with self ruffles and narrow black velvet ribbon. Over this was a white pinafore back and front of lacy material tied at the sides."

Is Sophia your ancestor? Please don't go away!

ask our community of genealogists a question.
Sponsored Search by Ancestry.com
DNA
No known carriers of Sophia's DNA have taken a DNA test. 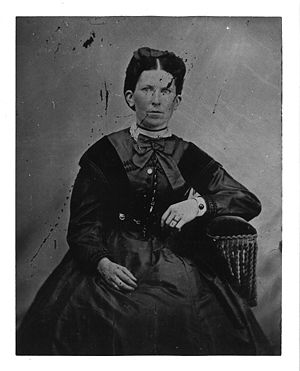 Shari Ourth
Davison-1814 and Davison-15 appear to represent the same person because: Please merge our shared ancestor. I added a source reference.