Emily Davison was a part of the Suffragette Movement.

Emily Davison is Notable.
Emily Wilding Davison was a militant activist who fought for women's suffrage in Britain. She was jailed on seven occasions and force-fed 49 times. She is best known for stepping in front of King George V's horse Anmer at the Epsom Derby on 4 June 1913, sustaining injuries that resulted in her death four days later.

Emily Wilding Davison, the daughter of Charles Edward Davison and his second wife, Margaret (Caisley) Davison, was born on October 11, 1872 at Greenwich in London, England.[1] She was baptised on December 9, 1872 at St Alphege, Greenwich.[2]

After attending Kensington Prep School, Davison took classes at Royal Holloway College[3] and at Oxford University, but she couldn't officially earn a degree from either institution. Women were prohibited from doing so at the time.

In 1895 she began teaching at the Church of England College for Girls at Edgbaston. The following year she found employment at Seabury School, Worthing (1896–8). Eventually she raised enough money to return to university education. After graduating from University of London she obtained a post teaching the children of a family in Berkshire.[4]

Emily joined the Women's Social and Political Union in 1906. She gradually became more and more involved in WSPU activities and in June 1908, was one of the chief stewards at a WSPU demonstration in London. The following year Emily gave up full-time teaching so that she could devote more of her time to the WSPU. Emily also became involved with the Workers' Educational Association.[4]

Emily became a natural follower of the Suffragettes. She took part in attacks on property. She became a leading member of the Suffragettes and was imprisoned and force-fed. On one occasion she barricaded herself in a prison cell to escape force-feeding. Her cell was flooded with ice cold water which drenched her while workmen broke down the cell door. Such treatment only made her even more determined.[4]

On another occasion while in prison, she threw herself off of a prison upper gallery floor.[4] She was badly injured but realised that a Suffragette dying in prison would look bad for the authorities - who were to respond to this real threat by the introduction of the Cat and Mouse Act.[5]

It is unclear what exactly Davison had in mind on June 4, 1913. She attended the Epsom Derby with the intent of advancing the cause of women's suffrage, bringing with her two suffragette flags. After the race began, Davison ducked under the railing and strode onto the track. She put her hands up in front of her as Anmer, a horse belonging to King George V, made its way toward her. King George V and Queen Mary were watching this spectacle unfold from their royal box.

The horse crashed into Davison and struck her in the head. The jockey riding Anmer was also injured, but the horse was unhurt. Davison was taken from the track and brought to a nearby hospital. Never regaining consciousness, she died four days later on June 8, 1913 at Epsom Cottage Hospital.[6]

A public funeral was held in London on 14 June 1913. Emily Davison's body was taken from Epsom and escorted, by a large and spectacular procession, from Victoria to St.George's Church, Bloomsbury, where a memorial service was held, and afterwards to King's Cross where the body was entrained for Northumberland for burial at the parish church of St Mary's, Morpeth, on 15 June.[4]

ask our community of genealogists a question.
Sponsored Search by Ancestry.com
DNA Connections
It may be possible to confirm family relationships with Emily by comparing test results with other carriers of her ancestors' mitochondrial DNA. However, there are no known mtDNA test-takers in her direct maternal line. It is likely that these autosomal DNA test-takers will share some percentage (beta) of DNA with Emily: 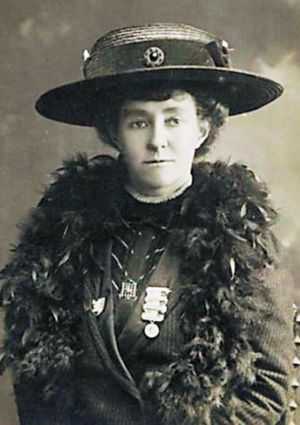 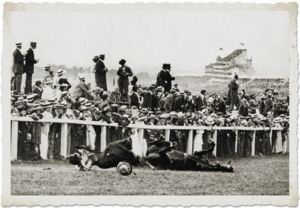 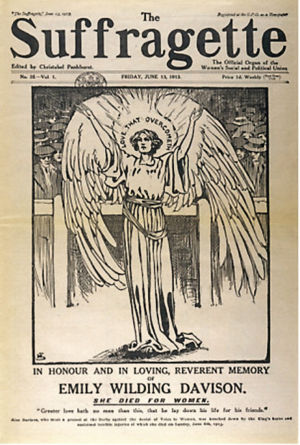 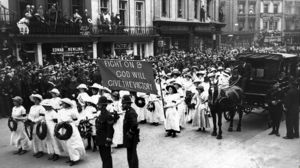 Front Page of the Daily Sketch 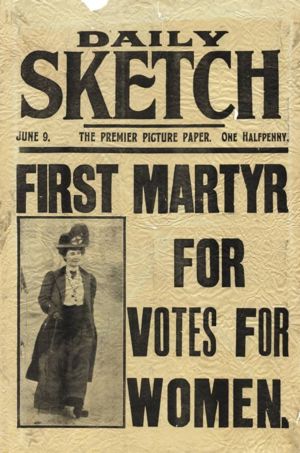 Gillian Thomas
Hi Michele, thanks for such a wonderful profile. The England Project has a Suffragists and Suffragettes topic, and would love to co-manage this profile with you. See Project Managed Profiles Help for more information. I'll send you a trusted list request explaining how to add the England Project account as manager for the profile. Please contact me if you would like to discuss. Regards, Gillian, Leader, England Project.
posted Mar 28, 2019 by Gillian Thomas