Her name "is said in Smith's text to be "Oakleaf." (Smith, 156; Murphy, 28) Murphy cites the Hočąk version of this name as, Nąnoap. (Murphy, 187) She obtained the Hočąk versions of her names from the Hocąk Wazija Haci Language Division of the HoChunk Nation. (Murphy, p.c. to Dieterle, 8 March 2009) The full version should be Nąno'abᵋwįga (> Ną-no-'ap-wį-ga). The word nąno appears in Miner's wordlist as "oak wood." This would seem to have come from a very early *nǫ-nǫ, a reduplicated emphatic which literally means, "wood-wood," a way of emphasizing the hardness of oak. However, it is rather odd that the word "oakleaf" should be rendered as "oak-wood leaf," rather than čašgegu'ap, "oak leaf." In fact, it appears that the name "Oakleaf" comes from the play "Glory of the Morning" written by Prof. Leonard in 1912. (Leonard) The cast of characters consists of a medicine man called "Black Wolf," the "Chevalier" (= de Carrie), who is given the Indian name "Half Moon," Glory of the Morning, and their two children, Red Wing and Oak Leaf. All these names except "Glory of the Morning" appear to be made up. However, they are not without their source of inspiration. In one of the readily available sources for "Glory of the Morning" in 1912, the "Recollections of Augustin Grignon," we find in a single sentence, the names "Leaf," "Red Wing," and "Black Wolf," with the former two (brother and sister in the play) occurring right next to each other. (Grignon, 271) The theater set contains an oak tree with oak leaves scattered about according to the stage directions, so there is not much of a leap from Leaf to Oak Leaf. Oakleaf, ex hypothesi, will have entered the "tradition" by some Hočąks inferring incorrectly from the play that this was the real name of the daughter and spreading this conclusion so that it soon became indistinguishable from the authentic elements of the oral tradition." (Dieterle)

"The old chief’s [ Spoon's] sister, who had been taken by her father to Montreal, and educated there, was married to Laurent Fily, a Quebec merchant, whose son, of the same name, was long a clerk for Augustin Grignon, and is frequently mentioned in Grignon’s Recollections.” (de la Ronde, 347) The father referenced is Sabrevoir de Carrie. However, it is not the case that Laurant's father bore the same name. In fact his name was "Constant." "Constant" was the middle name of Laurant. This is shown in the marriage record of St. Ignace de Michilimakinak:

“August 16, 1762, I, … received the mutual marriage consent of
messire Constant Kerigonfili and of angelique metivier, and gave
them the nuptial Benediction. — P. du Jaunay, miss. of the Society
of Jesus.” (Mackinac Register, 486)

“After [Jean] Lecuyer’s death, his widow employed Laurent Fily to continue the business in her behalf, and he continued till about the commencement of the war [of 1812], when Francis Roy … took charge of the business.” (Grignon, 289) "Laurent Fily, who was first a clerk for Lecuyer, was located there several years as a trader; Mr. Fily, a native of Mackinaw, whose mother was a sister of the early French trader De Kau-ry, died at Grand Kau-kau-lin, in the autumn of 1846, at the age of eight-three years, active and erect to the last.” (Grignon, 290) This requires a revision to be correct: it was not the sister of De Carrie who married Constant Fily, but his daughter, as de la Ronde has it. The trader is Sabrevoir de Carrie, whose daughter is usually called "Oakleaf." However, Laurant's mother was Marie A. Metivier, as we know from the baptismal records:

“September 13, 1764, I solemnly baptized in the church of this mission
Laurant Constrant, legitimate son of Monsieur Constant Kerigoufili
and of Angelique Metivier, his wife, born on the 8th of this month.
The godfather was Laurant du Charme, voyageur; and the godmother
Marguerite Metivier, his wife. — P. du Jaunay, miss. of the Society of
Jesus.” (Mackinac Register, 70)

All narrators that were her contemporaries agree that Oakleaf was married to Laurant's father (Constant), which leads to a paradox. However, this paradox is easily solved. When Oakleaf was in Montréal, her father was fatally wounded, and she became an orphan, although she was probably in her teens at the time. It must have been the case that she was adopted by the Metivier family, perhaps because Mrs. Metevier was actually the one who was De Carrie's sister, leading to Grignon's confusion. Almost all the Indian women who married Frenchmen took on French names to gain proper legal standing; however, when Marie Angelique De Carrie was adopted, she changed her last name to "Metivier," and it was under this name that she married Constant.

1) Constant married twice, having Oakleaf as one wife, and Marie as another.
Marie was Laurent's mother, but all sources agree that Laurent's offspring
were descended from the Decoras. So either Marie is Oakleaf, or

2) Oakleaf married Laurent and not his father Constance. This creates a
generational dissonance, and contradicts de la Ronde.

3) Laurant married some other Decora. This contradicts only de la Ronde.

4) Marie was de Carrie's sister, and as per Grignon, and, contra de la Ronde,
de Carrie was Laurent's uncle. Laurent will have been, under this scenario,
a descendants of the de Carries, but not the Decoras. This fine point was
missed, and confusion resulted. However, this confusion would have to have
carried over to his descendants, and the fate of Oakleaf is, on this explanation,
left unanswered.

Is Oak Leaf your ancestor? Please don't go away!

ask our community of genealogists a question.
Sponsored Search by Ancestry.com
DNA Connections
It may be possible to confirm family relationships with Oak Leaf by comparing test results with other carriers of her mitochondrial DNA. However, there are no known mtDNA test-takers in her direct maternal line. It is likely that these autosomal DNA test-takers will share some percentage of DNA with Oak Leaf: 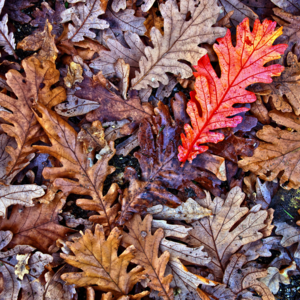 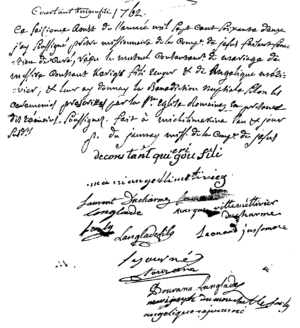