His son, William (who went to North Carolina) stated in his pension papers “My father moved before the War from Goochland County to Henry County, Virginia.” Maybe he was trying to get away from the British. William was strongly anti-British long before the Revolution. He was a carpenter and then a printer, and finally gave his life for American independence.

1757 - William was drafted from the Virginia Militia to serve in the King's Virginia Regiment. When he refused, a bounty of 40 shillings was offered for his capture. The Sept 2, 1757 Virginia Gazette described the wanted man as: "William Depriest, Goochland County, height 5'7 1/2", 24 years old, Brown complexion, country Virginia, trade sawyer."

In 1764 the British passed the Currency Act which prohibited printing paper money in the colonies and caused great economic hardships. Patrick Henry, in a speech before the House of Burgess in 1765, called upon the colony of Virginia to make paper money in defiance of the King but was voted down. He ended his speech "if this be treason, make the most of it!" William DePriest apparently took him seriously. [Patrick Henry's wife's family were neighbors of the DePriests.]

1767 - The following article is from the October 22, 1767 Virginia Gazette: "Williamsburg - Col. Terry, from Halifax county, informs that some time in August last a man was taken up and committed to their gaol, who upon examination confessed himself one of DePriest's gang, and that he, with others, guarded the said DePriest until he had struck 80,000£ Maryland currency, the bills mostly of the Dollar denomination. And some Gentlemen now in town inform that DePriest himself is now apprehended, and committed to Frederick county gaol in Maryland." [This amount of money goes beyond simple counterfeiting; it was a strong political statement.]

The Depriest Gang consisted of, Nathanial Abney who found the printing types to make the stamp and ink both which he got from Williamsburg, David Lyles who printed the money, Michael Hill Rodgers who signed the same sum, William Redman and John Ethrington were to recieve it from Michael Hill Rodgers at an appointed place, Joseph WIlcox and John Cox helped pass it around. William DePriest was the ring leader and confessed to having an alias of William Williams.

William was arrested in Sept 1767 and charged with counterfeiting eight-dollar Maryland Bills of Credit. News of his activities and arrest was reported in newspapers throughout the Colonies including Maryland, Pennsylvania, New York and Massachusetts. Shortly after his arrest, William wrote his wife Tabitha, but the letter was intercepted and taken to Maryland's governor. It is now included in the Maryland Archives.

"To Tabitha Depriest, Pitsylvania County, Virginia. Dear Wife I am very sorry to inform you of this Melancholy News that I am apprehended & am now in Irons at Frederick Town in Maryland. I beg that you may take it as easy as you can and come as soon as possible you can to see me and bring me as much Money as you can. I beg that you may go about among my Friends and they will help you to Money. After you have done what you can upon Smiths River I beg that you may go into Amherst County and apply to Col. William Cabbel [Cabel] and to James Nivils [Neville] and to all the heads of that County as my friends and to my Brother John and apply yourself to Capt Thomas Devenport [Davenport] in Cumberland County and he will do more for you than all the rest. It is needless to mention all for you know as well as I who to apply to. am your Loving Husband Wm Depriest"

William wrote a letter to a friend John Vulgamot using his alias William Williams. "My Dear Friend, Now is push come, I have no other hopes to get out of Prison, unless I can give Security for Two hundred Pounds, and if you would be friend enough to do that for me I shall forever acknowledge my Life and favour to you Pray for God Almightys sake fail not to do it, and that with great Speed for I must lie in Prison until the next Assize Court if you do not oblige me. I must beg of you as all Love and kindness not to turn a deaf Ear to my request, it is a matter of great moment and you shall never lose anything by your good will to me and if I can talk to you I could convince you that you shall not be hurted, my dear Friend be not hard hearted with me for now a friend will do me some good. I am your friend and well wisher William Williams"

William was first held in the Frederick County prison, then in October was taken to Annapolis, Maryland because it was feared his friends would attempt to free him. While home for him was Marrowbone Creek Smith's River, Pittsilvania County, Colony of Virginia, he died in the Annapolis jail while awaiting trial. He fell into a coma on March 9, 1768 and died on March 13th.

Tabitha continued living in Henry County, Virginia. with their son John. In 1781 she purchased some land on Jennings Creek, but sold it in 1786.

Most (or all) of his sons moved to NC (maybe during) the Revolutionary War. William and James seem to have fought in battles in North Carolina. His son Randolph went to South Carolina and fought as against the British as an Indian Spy. Many descendants are buried in Rutherford County, North Carolina. 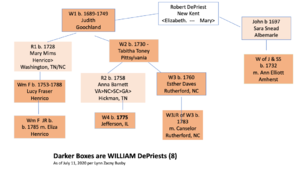