Fernando VII de Borbón was a member of the aristocracy in Europe.

Ferdinand VII (Spanish: Fernando VII de Borbón; 14 October 1784 – 29 September 1833) was twice King of Spain: in 1808 and again from 1813 to his death. He was known to his supporters as "the Desired" (el Deseado) and to his detractors as the "Felon King" (el Rey Felón). After being overthrown by Napoleon in 1808 he linked his monarchy to counter-revolution and reactionary policies that produced a deep rift in Spain between his forces on the right and liberals on the left. He reestablished the absolutist monarchy and rejected the liberal constitution of 1812. He suppressed the liberal press 1814-33 and jailed many of its editors and writers. Spain plunged into civil war on his death.

He proved in many ways the basest king in Spanish history. Cowardly, selfish, grasping, suspicious, and vengeful, [he] seemed almost incapable of any perception of the commonwealth. He thought only in terms of his power and security and was unmoved by the enormous sacrifices of Spanish people to retain their independence and preserve his throne.

When a popular riot at Aranjuez forced Charles IV to abdicate in March 1808, he ascended the throne but turned again to Napoleon, in the hope that the emperor would support him. He was in his turn forced to abdicate on 6 May 1808 and Ferdinand effectively had given the throne to Napoleon. Napoleon kept Ferdinand under guard in France for six years at the Chateau of Valençay.

While the upper echelons of the Spanish government accepted his abdication and Napoleon's choice of his brother Joseph Bonaparte as king of Spain, the Spanish people did not. Uprisings broke out throughout the country, marking the beginning of the Peninsular War. Provincial juntas were established to control regions in opposition to the new French king. After the Battle of Bailén proved that the Spanish could resist the French, the Council of Castile reversed itself and declared null and void the abdications of Bayonne on 11 August 1808. On 24 August, Ferdinand VII was proclaimed king of Spain again, and negotiations between the Council and the provincial juntas for the establishment of a Supreme Central Junta were completed. Subsequently, on 14 January 1809, the British government acknowledged Ferdinand VII as king of Spain.

Five years later after experiencing serious setbacks on many fronts, Napoleon agreed to acknowledge Ferdinand VII as king of Spain on 11 December 1813 and signed the Treaty of Valençay, so that the king could return to Spain. The Spanish people, blaming the liberal, enlightened policies of the Francophiles (afrancesados) for causing the Napoleonic occupation and the Peninsular War by allying Spain too closely to France, at first welcomed Fernando. Ferdinand soon found that in the intervening years a new world had been born of foreign invasion and domestic revolution. In his name Spain fought for its independence and in his name as well juntas had governed Spanish America. Spain was no longer the absolute monarchy he had relinquished six years earlier. Instead he was now asked to rule under the liberal Constitution of 1812. Before being allowed to enter Spanish soil, Ferdinand had to guarantee the liberals that he would govern on the basis of the Constitution, but, only gave lukewarm indications he would do so.

Ferdinand's restored autocracy was guided by a small camarilla of his favorites, although his government seemed unstable. Whimsical and ferocious by turns, he changed his ministers every few months. "The king," wrote Friedrich von Gentz in 1814, "himself enters the houses of his prime ministers, arrests them, and hands them over to their cruel enemies;" and again, on 14 January 1815, "the king has so debased himself that he has become no more than the leading police agent and prison warden of his country."

The king did recognize the efforts of foreign powers on his behalf. As the head of the Spanish Order of the Golden Fleece, Ferdinand made the Duke of Wellington, head of the British forces on the peninsula, the first Protestant member of the order.

Ferdinand VII was married four times. In 1802 he married his first cousin Princess Maria Antonietta of the Two Sicilies (1784–1806), daughter of Ferdinand I of the Two Sicilies and Marie Caroline of Austria. There were no children, because her two pregnancies (in 1804 and 1805) ended in miscarriages.

In 1816, Ferdinand married his niece Maria Isabel of Portugal (1797–1818), daughter of his older sister Carlota Joaquina and John VI of Portugal. She bore him two daughters, the first of whom lived only five months and the second of whom was stilborn.

In 1819, Ferdinand married Princess Maria Josepha Amalia of Saxony (1803–1829), daughter of Maximilian, Prince of Saxony and Caroline of Bourbon-Parma. No children were born from this marriage.

Lastly, in 1829, Ferdinand married another niece, Maria Christina of Bourbon-Two Sicilies (1806–1878), daughter of his younger sister Maria Isabella of Spain and Francis I of the Two Sicilies. She bore him two daughters.

As Ferdinand lay dying his new wife, Maria Christina of Bourbon-Two Sicilies had him set aside the Salic Law, which would make his brother Don Carlos heir to the throne instead of any female. Ferdinand was thus succeeded by his infant daughter Isabella II. Don Carlos revolted and said he was the legitimate king. Desperate for support, the Queen (as Regent for her daughter) turned to the liberals. She issued a decree of amnesty on 23 October 1833. Liberals who had been in exile returned and dominated Spanish politics for decades, and the Carlist Wars resulted.[1]

Is Fernando VII your ancestor? Please don't go away!

ask our community of genealogists a question.
Sponsored Search by Ancestry.com
DNA Connections
It may be possible to confirm family relationships with Fernando VII by comparing test results with other carriers of his Y-chromosome or his mother's mitochondrial DNA. Y-chromosome DNA test-takers in his direct paternal line on WikiTree: 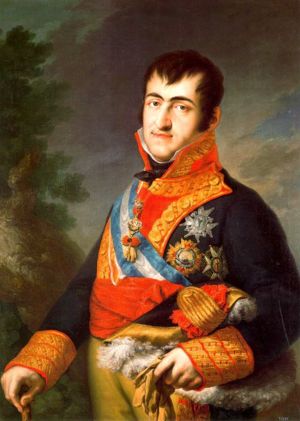 Fernando VII is 21 degrees from Jaki Erdoes, 9 degrees from Wallis Windsor and 10 degrees from Henry VIII of England on our single family tree. Login to find your connection.