"Our Debt to the Red Man: The French-Indians in the Development of the United States'; by Louise Seymour Houghton; Stratford Company; 1918, p. 184: ' Angel De Cora Dietz, teacher of Indian Art at Carlisle, comes of a family long celebrated in Indian annals. Early in the eighteenth century (1729) a French officer, Sabrevoir De Carrie, married Wa-hopo-e-kan, a daughter of the principal chief of the Winnebagoes. Their son Chou-ke-ka, born in 1730, was known to the whites as Spoon De Kaury. He became hereditary chief of the tribe, and was always friendly with the whites, even when at war with other tribes. With Pierre Paquette, Lie Roy and other mixed-bloods, "noble old De Kaury," as Mrs. Kinzie calls him, helped to make the history of the Middle West by assisting the Government in treaties with the Indians. It was principally through his influence that the treaty of June 3, 1816 was negotiated, he being then long past eighty. He died that same year at Portage City. His wife, Flight-of-Geese, was daughter of the celebrated Winnebago chief Nawkaw (Walking Turtle). They left six sons and five daughters, whose blood runs in several well known metis families of Wisconsin and Minnesota — Grignon, Ecuyer, Le Roy and others. Their eldest son, Ko-noka, also called Scha-ship-ka-ka (War Eagle) was known in early Chicago as Old De Kaury or Greyheaded De Kaury. He was born in 1747, served in the British campaign against Sandusky in 1813 (says Mrs. Kinzie) signed the treaty of Prairie du Chien on behalf of the Winnebagoes in 1825, at Caledonia, the largest of the Winnebago villages, containing 100 lodges. Mrs. Kinzie says that he was believed to be 143 years old at his death. His son Cha-ge-ka-ka, or Little De Kaury, succeeded him as chief, but died within six months. He was the idol of the Indians but was very rebellious to the plan of government to remove the Winnebagoes to Nebraska. His younger brother Hopne-scha-ka (White Fiend) De Kaury succeeded in the chieftainship.'" [1]

"Access Genealogy - Indian History of Winneshiek County Iowa: 'Genealogy and History of the Decorah Family... Hopokoekau, or 'Glory of the Morning' also known as the Queen of the Winnebagoes, was the mother of a celebrated line of chiefs, all of whom, well known to border history, bore in some form the name Decorah. Her Indian name is also given as Wa-ho-po-e-kau. She was the daughter of one of the principal Winnebago chiefs. There is no record of the date of her birth or death. She became the wife of Sabrevoir De Carrie, who probably came to Wisconsin with the French army, in which he was an officer, in 1728. He resigned his commission in 1729, and became a fur-trader among the Winnebagoes, subsequently marrying “Glory of the Morning.” He was adopted into her clan and highly honored.

After seven or eight years, during which time two sons and a daughter were born to him, he left her, taking with him the daughter. The queen refused to go with her husband, and remained in her home with her two sons. “The result is to-day that one-half or two-thirds of the Winnebago tribe have more or less of the Decorah blood in their veins.”1 Through the intervening generations there has been no other mixture of Caucasian blood, so that the Decorahs of to-day are probably as nearly full-bloods as any Indians in any part of the country. De Carrie returned to Canada, re-entered the army, and was killed at Ste Foye in the spring of 1760. The daughter whom he took with him, became the wife of a trader, Constant Kerigoufili, whose son, Sieur Laurent Fily (so-called), died about 1846...'" [2]

"Indian Names on Wisconsin's Map', by Virgil J. Vogel; Univ of Wisconsin Press; 1991, p. 73: 'On Sept 25, 1766, Jonathan Carver, ascending the Fox River... arrived at Doty Island... reported, 'Here the Queen who resides over this Winnibago tribe instead of a sachem, received me with great civility, and entertained me in a very distinguished manner... we know her as Ho-po-koe-kaw, mistranslated as 'Glory of the Morning', a Winnebago woman who married the French officer Sabrevoie de Carrie and started the distinguished Decorah family... De Carrie was killed in battle against the British in Quebec, September 13, 1759, but his name, in the form Decorra, Decorah, Dekorra, etc., is still prominent among the Winnebago...'" [3]

Schachipkaka, was the son of Choukeka, called by the whites, Spoon Dekaury; and who was the son of Sabrevoir De Carrie, corrupted into Dekaury, an 0&cer in the French army in 1699, under De Boisbriant; and resigning his commission in 1729, became an Indian trader among the Winnebagoes, subsequently taking for a wife the head chief’s sister, named Wahopoekau, or Glory of the Morning. After living with her seven or eight years, he left her, and their two sons, whom, she refused to let him take away, but permitted him to take their daughter.

De Carrie re-entered the army, and was mortally wounded at Quebec, April twenty-eighth, 1760, dying of his wounds at the hospital at Montreal. His eldest son, Choukeka, or the Spoon or Ladle, was made a chief, and was quite aged when he died at the Portage about 1816 and, at his request, was buried in a sitting posture, on the surface of the ground, with a small log structure over it, surrounded by a fence. I saw his burial place in 1828, when the red cedar posts, of which the fence was made, were yet undecayed. His widow died, two miles above Portage, about 1868, at a very advanced age. The old chief’s sister, who had been taken by her father to Montreal, and educated there, was married to Laurent Fily, a Quebec merchant, whose son', of the same name, was long a clerk for Augustin Grignon, and is frequently mentioned in Grignon’s 'Recollections.'

'Choukeka was succeeded by his son, Schachipkaka, who had six brothers and five sisters. One of the brothers was called Ruchkaschaka, or White Pigeon, called by the whites Black Dekaury; another, Choumenekaka, or Raisin Dekaury; another, Kokemauneka, or He-who-walks-between-two-Stars, or the Starwalker; another, Young Dekaury, called by the whites, on account of his trickish character, Rascal Dekaury; another, Waukon-gako, or The Thunder Hearer; and the sixth, Ongskaka, or White Wolf, who died young. Of the sisters, three married Indian husbands; one married a trapper named Dennis De Riviere, and afterwards to Perrish Grignon; the other to John B. l’Ecuyer, the father of Madame Le Roy. At the western end of the Portage, there was a warehouse built; and three houses where Perrish Grignon and his wife, sister of the chief Dekaury, were living; the second one was occupied by his son, Lavoin Grignon; the other one by J. B. l’Ecuyer. Mr. Le Roy was living near where Mr. O. P. Williams’ house was subsequently located. He told me that Major Twiggs, of the Fifth Regiment of infantry, required the place where his first house stood for postpurposes; for which however, he paid him well.'" [4]

"THE WISCONSIN ARCHEOLOGIST And Transactions of The Wisconsin Archeological Society, Volume 6, Number 1', by Charles Edward Brown; The Wisconsin Archeological Society; USA; 1906-1907, pp. 136-137: '...Hopokoskau, or Glory of the Morning, also known as the Queen of the Winnebago, was the mother of the celebrated line of Creole chiefs known to border history under the various names of Decorah. She was the sister of the head chief of the Doty island village. (5, W. H. C, 156-297.) Of the date of her birth there is no record. Her Indian name is also given as Wa-ho-po-e-kau. She became the wife of Sabrevoir De Carrie, an officer in the French army, in 1699, under De Boisbriant. He resigned his commission in 1729, and became a trader among the Winnebago, subsequently marrying Glory of the Morning. After seven or eight years, during which time two sons and a daughter were born, he left her, taking with him the daughter. During the French and Indian war, he [re-enlisted in] the army, and was mortally wounded before Quebec, on April 28, 1760. This places his injury as occurring two weeks before the fall of that stronghold, and the deaths of both Wolfe and Montcalm. He must have been injured in some of the almost daily assaults made by Wolfe upon some part of the long defenses on the bluffs of the St. Lawrence. He died in the hospital at Montreal. Glory of the Morning refused to go to Montreal with her husband and remained in her island home with her sons. The daug'hter whom De Carrie took with him, married Sieur Laurent Fily, a merchant of Quebec, who subsequently removed to Green Bay, and has descendents... Captain Jonathan Carver who visited the Queen in 1766... 'No one could tell her age; but all agreed she must have seen upwards of one hundred winters.'" [5]

This sticker appears anachronistic for him

Sabrevoir de Carrie was a Wisconsinite.

Is Sabrevoir your ancestor? Please don't go away!

ask our community of genealogists a question.
Sponsored Search by Ancestry.com
DNA Connections
It may be possible to confirm family relationships with Sabrevoir by comparing test results with other carriers of his Y-chromosome or his mother's mitochondrial DNA. However, there are no known yDNA or mtDNA test-takers in his direct paternal or maternal line. It is likely that these autosomal DNA test-takers will share some percentage of DNA with Sabrevoir:

Where Sabrevoir de Carrie was Mortally Wounded: The Battle of Ste. Foy, by George B. Campion 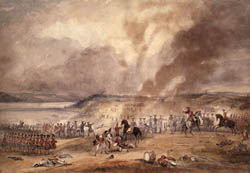 Danielle Liard
bio needs some cleaning up, appears to be mostly about his descendants.
posted Feb 18, 2021 by Danielle Liard
[Living Lambert]
PRDH says: