Jewish Immigrant to Province of Georgia abroad the William and Sarah, 1733

Abraham De Lyon born 1702 in Portugal brought vines from his vineyards on the Tagus River in Portugal and tried to start them out in Georgia. Abraham De Lyon was a winegrower in Portugal who fled from the Inquisition to London. He married Esther Nunez June 5 1732 in London. They were two of 42 Jews sent by London's Jewish community to Savannah, Georgia. They later fled northward in 1740/41 fearing the Spaniards in Florida would defeat Ogelethorp in Georgia.

One of the first Jewish settlers in Georgia, U. S. A.; ancestor of the well-known family of that name which has figured prominently in the annals of that state. According to a family tradition he was born in Spain. The early records, however, invariably describe him as "a vineron from Portugal" and as having been for years prior to his emigration "a vineron in Portugal." He went to America in the same year that the colony of Georgia was founded by Oglethorpe, and settled in 1733 in Savannah, where he soon became a freeholder.

The trustees of the colony were especially desirous of making Georgia a wine-producing country; and De Lyon soon attracted the attention of their agents by his ability as a horticulturist and vinegrower. He introduced viticulture and cultivated several kinds of grapes, among them the Porto and Malaga, to great perfection. He proposed to the trustees that if they would lend him £200 sterling he would employ that sum, with a further sum of his own, in importing from Portugal "vines and vinerons." His proposition was accepted, and the money was sent to Oglethorpe, who, however, gave only a part of it to De Lyon, claiming that "he had other uses for the money."

In his journal, under date of Dec., 1737, Col. William Stephens, the agent of the trustees, gives an elaborate description of De Lyon's vineyard.

De Lyon probably removed from Georgia about 1740, when the illiberal policy of the trustees caused both Jewish and Christian settlers to leave; and there is a definite record of Mrs. De Lyon's departurein that year in the trustees' journal. In all likelihood, however, De Lyon soon returned to Savannah and died there.

ask our community of genealogists a question.
Sponsored Search by Ancestry.com
DNA Connections
It may be possible to confirm family relationships with Abraham by comparing test results with other carriers of his Y-chromosome or his mother's mitochondrial DNA. However, there are no known yDNA or mtDNA test-takers in his direct paternal or maternal line. It is likely that these autosomal DNA test-takers will share some percentage of DNA with Abraham: 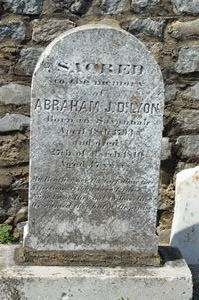