Currently integrating all the purported husbands and descendants into the biography. Takes some time. Thanks for your patience! Rassinot-1 21:32, 20 November 2019 (UTC)
Research has shown that this person never existed. See the text for details.

This person did not exist. The Collineau de Montaguerre family name appeared at the end of the 18th century or the beginning of the 19th in Nantes. The family settled in the French Antilles.

"Unknown" or "Inconnue" Collineau de Montaguerre, sometimes just "Collineau de Montaguerre" (with Collineau as first name) is supposed to be the ancestress of many, many French emigrants, usually in New France. She is, usually, the last female ancestor in a line, associated with unknown husbands. Apart from her unusual and strange name, it is fairly unlikely that the wife of an unknown 16th or 17th century man would be known.

A simple look at her profile shows how improbable she is, with currently 38 husbands representing the 30+ different emigrant descendants (grandchildren or great-grandchilden) she is supposed to have.

This "Unknown" (Inconnue in French) has puzzled many, and to make a long story short, it was decided that she was probably, initially, someone's code for and end-of-line ancestor, and that this joke propagated. This has already been discussed here and here. I think it's time to decide that she did not exist and officially move her to the Disproven Existence project. This means that all the "unknown" husbands she's connected to will be disconnected and replaced by links in her biography.

She could not have been Collineau (given name) de Montaguerre (family name), because women were not given "Collineau" as a given name (Colinot would be possible for a man, from "Colin", a variant of Nicolas).

The family name "de Montaguerre" is rare, if not non-existent (since 1891, there has been one "de Montagère" birth in France, after 1966), which rules out the possibility of several different, unrelated people called "Collineau de Montaguerre".

See this G2G discussion of the Collineau de Montaguerre problem.

"Collineau de Montaguerre" profiles are usually unsourced, contain no information to help indentify them, and tend to be earliest ancestors of lines, or attached to dubious genealogies. They cannot be traced to any reliable source or documentation. It has been speculated that they were originally place-holders for "brick walls" in the ancestry of some emigrants to New France, and were then propagated without explanation from an internet genealogy website to another.

Because the information contained in these profiles is unreliable or false, this category has been placed under Frauds and Fabrications. This is not ideal, as they are probably not voluntary fabrications.

Tagging this profile uncertain (No traces left by the "Collineau de Montaguerre" family before the early 19th century, too many issues with this family group).

Is Collineau your ancestor? Please don't go away!

ask our community of genealogists a question.
Sponsored Search by Ancestry.com
DNA
No known carriers of Collineau's ancestors' DNA have taken a DNA test. 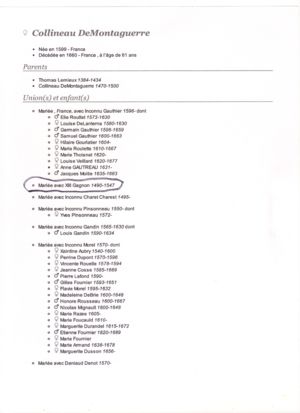 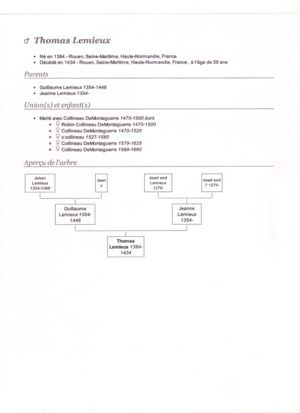 E Martin
Demontaguerre-69 and De Montaguerre-4 appear to represent the same person because:

please merge into De_Montaguerre-4 to clear duplicate. thank you

Isabelle (Rassinot) Martin
Please see https://www.wikitree.com/g2g/944209/disproven-existence-notice-inconnue-collineau-montaguerre
posted Nov 20, 2019 by Isabelle (Rassinot) Martin
Danielle Liard
have added the category Collineau.... to all the listed husbands also, as well as tagging them all with uncertain existence
posted Nov 20, 2019 by Danielle Liard

Jack Day
This profile is already in the Disproven Existence Project, but does not yet have a finished profile explaining how this "person" came to be disproven. Also, Disproven Existence Profiles should not be linked to parens, spouses or children -- in this case there are a mind-boggling number of spouses, who shoulsd be listed in the narrative with links, and disconnected. Also ALL of the spouses are tainted by this profile and need an explanation as to what their supposed marriage meant; in some cases this could lead the spouse also to being disproven existence.
posted Nov 20, 2019 by Jack Day

E Martin
DeMontaguerre-14 and De Montaguerre-4 appear to represent the same person because:

Please merge this other occurrence of the mysterious Collineau de Montaguerre into the "master profile". Thanks.

E Martin
DeMontaguerre-68 and De Montaguerre-4 appear to represent the same person because:

Please merge this other occurrence of the mysterious Collineau de Montaguerre into the "master profile". Thanks.

Lemieux-387, Collineau_Demontaguerre-1 and DeMontaguerre-34 are the same person - all dates are wrong.

Research suggests that this person may never have existed. See the text for details.

Norman Gagnon
Lemieux-387 and Collineau Demontaguerre-1 do not represent the same person because: There is too great a difference between the two profiles as far as date of birth. 1384 v 1499. (also this would mean too great a difference in date of death) The only known source of information, is posted on Lemieux-387 as a photo image. I believe this one gives 1384 as a birth date. There are more photo image sources on Collineau-4, which is for Lemieux's supposed daughter, which I find confusing at the very least. This is one case that I will not touch with a 10 foot pole. If the present sources are not acceptable to you, then by all means delete whatever. I am not the author of the sources given.
posted on DeMontaguerre-34 (merged) Nov 13, 2017 by Norman Gagnon

Isabelle (Rassinot) Martin
Lemieux-387 and Collineau Demontaguerre-1 appear to represent the same person because: Names are very similar. Collineau de Montaguerre is an extremely rare name, so these two people must be the same. Please provide sources before rejecting, thanks.
posted on DeMontaguerre-34 (merged) Nov 12, 2017 by Isabelle (Rassinot) Martin
Cathy Falsetto
The dates are wrong. He died before he was born.
posted on DeMontaguerre-34 (merged) Jul 21, 2014 by Cathy Falsetto