José Francisco de San Martín y Matorras (25 February 1778 – 17 August 1850), known simply as José de San Martín, was an Argentine general and the prime leader of the southern part of South America's successful struggle for independence from the Spanish Empire, who served as the Protector of Peru (first President of Peru). San Martín is regarded as a national hero of Argentina and Peru

José de San Martín was the fifth and last son of Juan de San Martín, an unsuccessful Spanish soldier, and Gregoria Matorras del Ser. He was born in Yapeyú, Corrientes, an Indian reduction of Guaraní people. The exact year of his birth is disputed, as there are no records of his baptism. Later documents formulated during his life, such as passports, military career records and wedding documentation, gave him varying ages. Most of these documents point to his year of birth as either 1777 or 1778.

San Martín married María de los Remedios de Escalada, a 14-year-old girl from one of the local wealthy Argentine families, in 1812. On 22 July 1822, after a closed-door meeting with fellow libertador Simón Bolívar at Guayaquil, Ecuador, Bolívar took over the task of fully liberating Peru. San Martín unexpectedly left the country and resigned the command of his army, excluding himself from politics and the military, and moved to France in 1824.

José de San Martín died on 17 August 1850, in his house at Boulogne-sur-Mer, France. Between 1850 and 1861, his corpse was buried in the crypt of the Basilica of Notre-Dame de Boulogne. San Martín's remains were finally repatriated to Argentina on 29 May 1880. The mausoleum was placed inside the Buenos Aires Metropolitan Cathedral.

Is José your ancestor? Please don't go away!

ask our community of genealogists a question.
Sponsored Search by Ancestry.com
DNA
No known carriers of José's DNA have taken a DNA test. 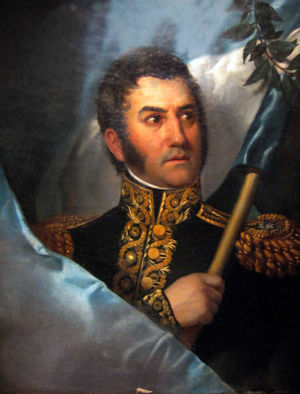