Robert de Vere is a member of the House of De Vere.

Robert de Vere was 3rd Earl of Oxford, hereditary Master Chamberlain and one of the Surety Barons for the Magna Carta.[1][2][3]

Robert was the son of Aubrey de Vere and Agnes, daughter of Henry de Essex.[1][2][3] His birth date is uncertain but may have been after 1164.[1][2] Frederick Lewis Weis gives a baptism year of 1164 but there appears to be no good evidence for this.[4]

After 1206, Robert de Vere married Isabel de Bolebec, daughter of Hugh Bolbec and wife, and widow of Henry de Nonant.[1][2][5] Robert paid the Crown at least part of a fine for the marriage (as she was a widow, King John had the right to determine her marriage).[3] Robert and Isabel had at least two children:

Through his wife, Robert held half of the Barony of Whitchurch, based in Buckinghamshire.[3][6]

Little is known of Robert's life before his marriage, apart from witnessing charters.[3]

1214 he witnessed a letter in which King John promised free elections to episcopal sees and abbacies.[1] In October that year he succeeded to the lands of his brother Aubrey[2][3], paying 1000 marks to King John for this and a wardship[1][3], but King John seems to have held back the title of Earl of Oxford: in January 1215 Robert witnessed a royal charter with his name but no title of Earl.[3] Robert's inheritance included the Barony of Hedingham, based in Essex.[7]

In the spring of 1215 he was one of the main participants in the rebellion against King John, and, when the Magna Carta was issued, he was one of the Surety Barons.[1][2][3] Within a few weeks he finally had royal recognition of his right to be Earl of Oxford.[3] In December 1215, along with other rebel barons, he was excommunicated.[1][2][3] In March 1216 King John's forces captured his castle at Hedingham.[1][3] Following this Robert swore allegiance to John[1][3], but this did not stop him being one of the barons who continued in rebellion and gave allegiance to Louis of France later in the year.[1][3]

Robert died before 25 October 1221 and was buried at Hatfield Priory, Essex.[1][2][3] After the Dissolution of the Monasteries, his effigy was transferred to the parish church of Hatfield Broad Oak.[3]

"Robert de Vere (d. 1221) was a member of a comital family, based at Hedingham (Essex), which owed its rise to eminence to the patronage of the Empress Matilda in the civil war of King Stephen’s reign in the 1140s. Robert himself was the third surviving son of Earl Aubrey (d. 1194) by his third wife, Agnes of Essex, and succeeded to the title on the death of his elder brother, another Aubrey in October 1214. Sometime before Michaelmas 1207 Robert had married Isabel de Bolebec, the aunt and namesake of Earl Aubrey’s wife, who had died childless in 1206 or 1207. Isabel the niece had been the heiress to the Bolebec estate, which was centred on Whitchurch (Bucks.), and her own heirs were her two aunts. Robert’s marriage can therefore be seen as part of a de Vere strategy to retain control over at least half of the Bolebec lands. The de Veres were one of the least well-endowed of the comital families and would have been loath to allow a valuable estate to slip from their grasp.

"Robert’s defection to the rebel side in 1215 provides yet another example of King John’s capacity to alienate men who should have been numbered among his natural allies. His predecessor in the title had been one of the king’s most loyal intimates and administrators. Robert was probably moved to defect in part by his resentment at the relief of 1000 marks charged for his entry into his inheritance, which was high for an estate of only moderate extent. Most of all, however, he probably nursed a grievance against the king for his failure to confirm him in the title of earl and in the office of court chamberlain, which de Veres held by hereditary right. Robert is known to have been present at the baronial muster at Stamford in April 1215 and he was named by the chronicler Roger Wendover as one of the principal promoters of discontent. He was a key figure in the East Anglian group of rebels. By 23 June, after the meeting at Runnymede, the king was evidently angling to regain his support because on that date a royal letter was issued which implicitly recognised him as earl of Oxford. By that time, however, it was too late: Robert had already been named to the Twenty Five. Towards the end of March 1216 John took possession of his castle at Hedingham after a three-day siege and the earl, who was not present, was granted a safe-conduct to seek the king’s forgiveness. Within months, however, he had defected to Louis of France and he was not to re-enter royal allegiance for good until the general settlement of the rebellion in the autumn of 1217.

"Robert died shortly before 25 October 1221 and was buried in Hatfield Broad Oak priory (Essex). A century after his death, to mark the long-delayed completion of the priory church, a fine tomb effigy to his memory was commissioned, carved by the same sculptors who produced the monument to Aymer de Valence, earl of Pembroke, in Westminster Abbey. At the Dissolution, the effigy was transferred to Hatfield Broad Oak parish church, where it remains. Robert’s widow obtained the guardianship of their son, Hugh, who was a minor, and of his estates, which she was to exercise for about ten years. She died on 3 February 1245 and was buried in the Dominican friary at Oxford, nearer to her own family’s estates."

Robert has previously been shown on WikiTree as father of Eleanor, wife of Ralph Gernon. No reliable evidence has been found for this.

The Oxford Dictionary of National Biography states that Robert de Vere and Isabel de Bolebec had just one child, Hugh.[3] The author of that entry has posted on Eleanor's profile that she has found no evidence that they had a daughter called Eleanor, or a child who married Ralph Gernon.

Douglas Richardson[2][8] and Medlands[5] both state that they also had a daughter Eleanor, who married Ralph Gernon. They cite Farrer's Honors and Knights' Fees, which states that "Sir Ralph [Gernon] was twice married, his first wife being Eleanor daughter of Robert de Vere, earl of Oxford..."[9] The citation given by Farrer is a Gernon pedigree in the 1899 volume of Collections for a History of Staffordshire which shows Ralph Gernon married first to "Eleanor dau. of Robert de Vere, Earl of Oxford" and second to "Hawisia (Tregoz)."[10] No source is given for this information, and it cannot be regarded as reliable.

A Gernon pedigree in William Farrer's Feudal Cambridgeshire does not identify the first wife of Ralph Gernon.[11]

Against this background, Eleanor was detached as daughter.

Lacking sources, the following profiles were detached as children: 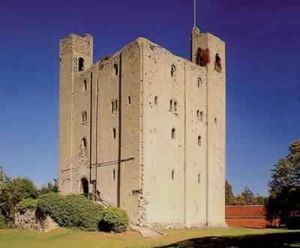 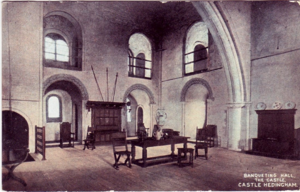 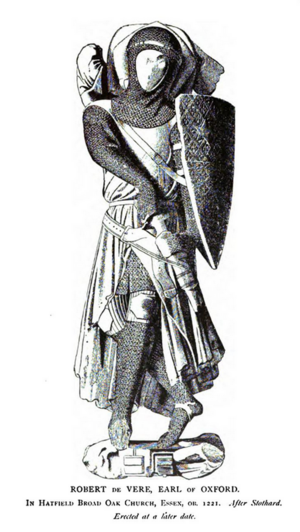 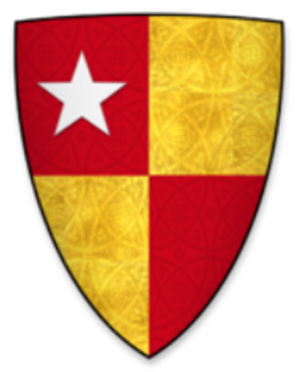 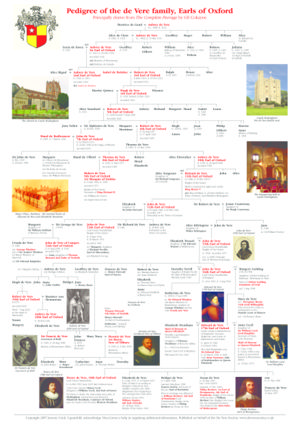 Michael Cayley
I have now finished the main work I intend on this profile. If anyone spots any typos or other slips, please either correct them or message me. Thanks!
posted Jan 03, 2020 by Michael Cayley

Michael Cayley
I have reassembled Professor Saul's biography for the 800th anniversary of the Magna Carta. We had permission to reproduce it, not to edit it or chop it up. (If I were him, I might feel aggrieved if I found out it had been cut up and spliced with other material.)
posted Jan 02, 2020 by Michael Cayley

Michael Cayley
I am now embarked on the main editing. In the process I intend to get rid of the use of Span IDs for references, now discouraged on WikiTree, and to replace some of the copied and pasted text (though I will leave the text from Professor Saul's biography). I will also draw on the ODNB entry for Robert de Vere. Please bear with untidiness as I continue work on the profile.
posted Jan 02, 2020 by Michael Cayley

any objection if I remove Alice & Robert as children and edit birth location from Hatfield, Broad Oaks, Essex, England (where he's buried) to be just Essex, England?

Gabrield Ludlow, immigrated in 1694 to New York. He married Sarah Hanmer. They had seven sons, and five daughters.

Chet Snow
The Wikipedia article cited in an earlier comment states that the first "documented" use of "Sir" was in 1297 but it adds that the practice of adding "Sire" (Norman French for "Seigneur" or "Lord") to high-level aristocrats [like Robert de Vere] was known as early as 1205 or earlier. It no doubt was a corruption of French and evolved after the Norman Conquest of 1066. I do not believe we should "nit pick" this custom for ANY Norman Lord acknowledged as a knight by his liege lord, the King, on WikiTree. Respected genealogist Richardson does not so why should we?
posted Mar 01, 2017 by Chet Snow

April (Dellinger) Dauenhauer
Well, Chase - you have been busy. It is a challenge to keep up with you :)