I found this on ancestry, posted by mary severe mandgie. Doing some research. It seems that everyone takes the seviers back to Don Juan de Xavier. Okay, but start adding up the dates and you'll see that some of the generations are out of alignment. Don Juan de Jasse, Chief Counselor to John III de'Albret who became King of Navarre when he married Catherine de Foix, married Maria de Xavier, who had inheirited her rank and posistion and castle from her Spanish mother(because of other heirs)-she was very wealthy. Don Juan took her name and rank and castle. This was in the mid 1400's. They had a HUGH family, the last born was in 1506 and became St.Francis Xavier (founder of the Jesuits). The lineage is thru one of his brothers, who was probably named Juan and then his son, and then his son, before it gets to the Don Juan de Xavier born in 1652 .This is the Don Juan de Xavier that has Valentine (John the Huguenot) in 1678, who in 1708 in the Parrish of St. Giles, Crippingate, London, England marries Mary Smith who was also born in that place. Two of the sons born to them, Valentine Sevier and William Sevier (SEVERE) ran away to America about 1740. Valentine went on to settle and have John Sevier in 1745. I am descended from Valentine "Hughuenot" Seiver. Wikitree Chaves-84

Is Don Juan your ancestor? Please don't go away!

ask our community of genealogists a question.
Sponsored Search by Ancestry.com
DNA Connections
It may be possible to confirm family relationships with Don Juan by comparing test results with other carriers of his Y-chromosome or his mother's mitochondrial DNA. However, there are no known yDNA or mtDNA test-takers in his direct paternal or maternal line. 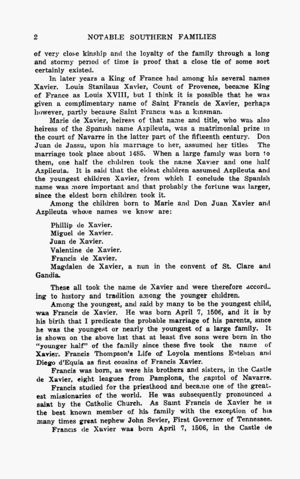 Judy (Chaves) Byrum
I do not know if he was Sephardic Jewish.
posted Oct 21, 2021 by Judy (Chaves) Byrum
[Living Mike]
I have seen research saying he was Sephardic Jewish, is this true?
posted Oct 21, 2021 by [Living Mike]
David Hughey Ph.D.
Xavier-31 and De Xavier-1 appear to represent the same person because: sane wife and child. De Xavier seems to be original LNAB,but pleade investigate.
posted Jul 28, 2019 by David Hughey Ph.D.