The name Kųnųgá is a birth order name among the Winnebago for the first born son. The name Caxšépsgaga (Scha-chip-ka-ka), "White Eagle," is a Thunderbird Clan name. Another name, a variation of Caxšépsgaga , is given as either Hee-tsha-wau-sharp-skaw-kau or Hee-tshah-wau-saip-skaw-skaw. Both variants are correctly translated as "White War Eagle."[1]The proper form of the name is Hicáwaxšébᵋsgaga, from hicáwaxšép, "war eagle"; sga, ska, "white"; and -ga, a definite article used in personal names.

"The locality now known as the Caffrey place, in the town of Caledonia, at the foot of the bluff, between the Wisconsin and Baraboo Rivers [was the site of Old Decorah's village]. The school house of district number five, now occupies the spot where the old chief died. De-kau-ry's town contained over one hundred lodges, and was the largest of the Winnebago villages."[4] The P. Caffrey place is found on the 1873 plat map of Caledonia Township, Columbia County, where School House 5 is clearly marked in the SE ¼ of the SW ¼ of Section 8, Township 12N, Range 08E, within a couple hundred feet at most of 43.528053, -89.572360. On the 1878 map of Columbia County, Section 8, the school house is actually drawn in. As to the village as a whole, John Brinks' original plat map of 1845 shows a group of square dots, usually indicative of habitations, in the SE ¼ of Section 8 at the foot of bluffs whose topology does not seem to have been very accurately depicted. It seems likely that the site of School House 5 fell within the limits of this village, as we might expect."[5]

He was the son of Čugiga Dekaury and an unnamed first wife. Had he really been 90 at his death, Kųnųgá will have been born in 1746. However, people at the time, both Indian and white, tended to greatly exaggerate their age since that enhanced their prestige. George Cattlin's painting of Decora shows no gray hair at all. Had he been born in 1746 he would have been 84 years old in 1830, yet showing none of his notable gray hair. From the painting of his eldest son, Lone Deer, in 1828, the subject seems to be still in his 20s. If his eldest son was born ca. 1800, then Old Decora was probably born ca. 1775, in which case, he likely died around the age of 60 or so.

Juliette Kinzie remembered him as, "the old Day-kau-ray, the most noble, dignified, and venerable of his own, or indeed of any tribe. His fine Roman countenance, rendered still more striking by his bald head, with one solitary tuft of long silvery hair neatly tied and falling back on his shoulders; his perfectly neat, appropriate dress, almost without ornament, and his courteous demeanor, never laid aside under any circumstances, all combined to give him the highest place in the consideration of all who knew him. It will hereafter be seen that his traits of character were not less grand and striking than were his personal appearance and deportment."[6]

"Before his father's death in 1816, Old Gray-headed Decorah had joined a band of Winnebagoes who took part August 2, 1813, in the attack led by General Proctor, with 500 regulars and 800 Indians, on Fort Stephenson on lower Sandusky river, Ohio, which was so gallantly defended by Maj. George Croghan with a force of 150 Americans and only one cannon. He also fought with Proctor and Tecumseh, a celebrated Shawnee chief, at the battle of the Thames, Canada, where a great part of the British army was either slain or captured by the American forces under Gen. Wm. H. Harrison, October 5, 1813, and where Tecumseh was shot."[7]

At the conclusion of the Winnebago War, Old Decorah submitted himself as a hostage on the understanding that if the perpetrators of various crimes were not surrendered to the government, then he was to be shot. Being in imperfect health, he asked Col. Snelling if he might not take the local waters for his health. The Colonel agreed on the solemn pledge that he would return to captivity at the end of each day. He replied that if he had a hundred lives, he would sooner lose them all than forfeit his word, or deduct from his proud nation one particle of its boasted honor. Some at the fort advised him to take this chance to escape, but he responded, "Do you think I prize life above honor?" He faithfully abided by his oath until the fateful day of his appoint execution arrived. When no one was surrendered, he remained as calm as ever, and by the good fortune of Gen. Atkinson's arrival, he was spared execution by the General's pardon.[8]

In a speech made before the Indian Agent at Portage, Wisconsin, Old Decorah stated his views on white education for Indian youth:

"Father, — We do not wish to do anything contrary to the will of the Great Spirit. If he had made us with white skins, and characters like the white men, then we would send our children to this school to be taught like the white children.

"Father, — We think that if the Great Spirit had wished (97) us to be like the whites, he would have made us so. As he has not seen fit to do so, we believe he would be displeased with us, to try and make ourselves different from what he thought good.

"Father, — I have nothing more to say. This is what we think. If we change our minds, we will let you know."[9]

"It was while Maj. Zachary Taylor was located at Prairie du Chien that he received from Old Gray headed Decorah a peace pipe now in the State Historical Museum at Madison Wisconsin. This calumet is a fine specimen, the head is of catlinite inlaid with lead polished to look like silver. The stem, or wooden handle, is about three feet long, rather rudely carved."[10]

Mrs. Kinzie related the following incident during the famine of 1832-1833 that speaks to the noble character of Old Decorah:

"The noble old Day-kau-ray came one day, from the Barribault, to apprise us of the state of his village. More than forty of his people, he said, had now been for many days without food, save bark and roots. My husband accompanied him to the commanding officer to tell his story and ascertain if any amount of food could be obtained from that quarter. The result was, the promise of a small allowance of flour, sufficient to alleviate the cravings of his own family.

When this was explained to the chief, he turned away. "No," he said, "if his people could not be relieved, he and his family would starve with them!" And he refused, for those nearest and dearest to him, the proffered succor, until all could share alike."[12]

He died at Petenwell Bluffs overlooking the Wisconsin River.[13] "This 'grand old chief,' whose Indian name was Scha-chip-ka-ka, died on the Wisconsin river, April 20th, 1836, in his ninetieth year."[14] "In 1836, the Indians had the misfortune of losing the best of their chiefs, Scha-chip-ka-ka [Čaxšépsgaga], or De-kau-ry. His death occurred April 20, at the age of ninety, at his village ... Before he died, De-kau-ry called the Catholic priest, Mr. Vanderbrook, who was at the Portage at the time, by whom he was baptized, according to Catholic rites, the day of his death, and was buried in their cemetery near the present Court House in Portage City; and since the abandonment of that burial ground, the old chief's resting place cannot be identified. He was succeeded by his son, called by the whites Little De-kau-ry, whose Indian name was Cha-ge-ka-ka; and he did not long survive, dying six months after his father. He was succeeded by his brother, Ho-pe-ne-scha-ka [Xopį́nįskága], or White French."[15]

Is White War Eagle your ancestor? Please don't go away!

ask our community of genealogists a question.
Sponsored Search by Ancestry.com
DNA Connections
It may be possible to confirm family relationships with White War Eagle by comparing test results with other carriers of his Y-chromosome or his mother's mitochondrial DNA. However, there are no known yDNA or mtDNA test-takers in his direct paternal or maternal line. It is likely that these autosomal DNA test-takers will share some percentage of DNA with White War Eagle:

Images: 3
Old Decora and His Family, by George Catlin 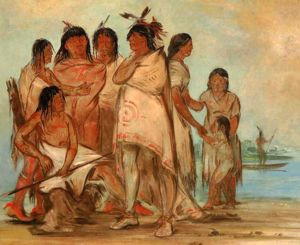 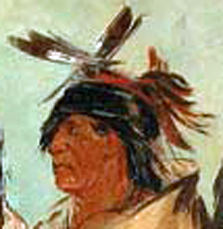 The Cataline Pipe Given to Zach Taylor by Old Decorah