Linda Waggoner recently discovered that Caīžąkēga was the son of "Old" Decora, and that he had the name "Lone Deer".[1] He was probably born around 1800.

Foster’s version of his name is Tchä́ēzha̬nkǽḵä, which in a better transliteration is Cáīžąkēga. This can be analyzed as ca, “deer”; (h)īžą, “a, one”; -kē, "when suffixed to a ordinal number, it indicates the total number ("the n of them”)."[2] The -ga is a definite article suffix used in personal names. This is difficult to render in English. Dorsey translates hižąke simply as “one”. The suffix -kē puts emphasis on the aggregate exemplifying the number, Peter Menaige translated this for Foster as "lone, lonely". So Cáīžąkē was translated as "Lone Deer”. “Lonely Deer”, however, carries inappropriate emotional implications.

The problem with such a name is that it suggests membership in the Deer Clan, a Lower Moiety clan; but Cáīžąkēga is a Decorah, and therefore a member of the Thunderbird Clan. It would have to have been an honorific nickname, but its significance as such is unclear.

"Tshizunhaukau was not a regular medicine-man, but he practised the art when it suited his convenience, and had the reputation of possessing the gift."[3]

"He maintained a high character as a warrior, and was one of the deputation who accompanied Nawkaw, the principal chief of the Winnebagoes, to Washington, in 1828."[4]

By 1834, after the death of his father and older brothers, he assumed the position of chief.[5]

He is most famous for his calendar stick shown in the painting by Charles Bird King. McKinney has this to say about it:

He was a sagacious man, who knew and thought more than
those around him. He noticed the seasons and changes of the
atmosphere, and had a strong memory for dates and events.
The portrait represents him holding in his hand a rod, which
was an invention of his own, and was covered with marks and
figures representing the divisions of time, and certain changes
of the seasons, to which were added signs, indicating the results
of certain calculations he had made respecting the weather. It
was a curious and original invention, the fruit of an inquisitive
and active mind, and the indication of a spirit that rose above
the sluggish incuriousness of his race. He had noticed the
phenomena which took place around him, with deep attention,
and had recorded upon the tablet of a retentive memory all
that seemed worthy of remark. He had endeavored, to the
extent of his limited knowledge and means of information, to
trace effects to their causes, and to find out the reasons of
uncommon events. The results of these inquiries were carved
upon his wand, which became thus an almanac, and doubtless
as complete a one, in reference to his wants, as our common
almanacs are to the enlightened astronomer.

Is Lone Deer your ancestor? Please don't go away!

ask our community of genealogists a question.
Sponsored Search by Ancestry.com
DNA Connections
It may be possible to confirm family relationships with Lone Deer by comparing test results with other carriers of his ancestors' Y-chromosome or mitochondrial DNA. However, there are no known yDNA or mtDNA test-takers in his direct paternal or maternal line. It is likely that these autosomal DNA test-takers will share some percentage of DNA with Lone Deer: 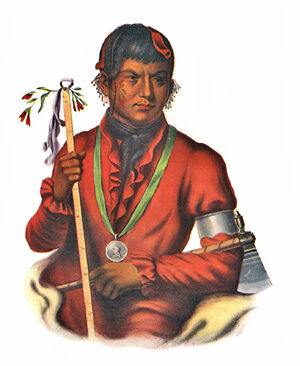