He seems to have been named "Spoon" (Cugiga) after his uncle. The name "Spoon" or "Ladle" refers to the utensil by which a feast is portioned out to those invited to participate. The chief, who is drawn from the Thunderbird Clan to which the Decoras belonged, is often in charge of ritual feasts and is therefore himself an instrument by which the feast is apportioned.

"Spoon ... was a tall, well-formed, manly-looking fellow, with a well-shaped head, pleasant, open features, and dignified demeanor — quite superior in appearance to the majority of Wisconsin Winnebagoes." (Thwaites, nt. 2)

McKenney (363) gives a sketch of him: "Although we shall scarcely infer the fact from his name, Amisquam, or the Wooden Ladle, is a very noted leader of the Winnebagoes, a fierce and restless tribe of the Upper Mississippi. ... He is a fine looking man, of large stature, and commanding mien, whose influence over the entire mass of the warriors of this numerous tribe is very great. He has led many war parties against the Chippewas, and has always been successful, returning laden with spoil and scalps.

The leader of such parties seldom engages in a fight as a common brave, nor does he usually even carry a gun. The systematic and cautious tactics of Indian warfare, and the inevitable disgrace which results from defeat, imposes upon him a responsible office; and like the general in the army of a civilized people, he is expected rather to direct the efforts of others, than to fight with his own hand. The plan of the enterprise is often the subject of a council, in which all who are of sufficient age may speak, and the decision is usually unanimous; for we know of no instance among the Indians in which questions are decided by majorities. When the leading features of the scheme are agreed upon, the execution is left to the war chief, who may rely on the secrecy, as well as the implicit obedience, of his well trained followers. On the eve of a battle, he gives his orders to his captains, or if the party be small, to the whole band; and during the fight he is engaged in overlooking (364) and directing the whole operation. Occasions may occur, as in all military enterprises, where it may be proper for the leader to place himself at the head of his men, and go foremost into battle; and in all cases when the fight thickens so that the braves meet hand to hand, the leader is thrown into personal contact with the enemy; but the general practice is as we have stated.

The Wooden Ladle was a general, or war chief, who led large parties of his people, and gained reputation by the sagacity with which he directed these military enterprises. He usually assembled his braves at Prairie du Chien; and before going out always adorned himself with a string of beads which he wore round his neck. This was to be the prize of the first warrior who should kill an enemy, and bring his head to the leader, and the trophy was always given on the spot."

"Spoon Decorah was a son of Old gray-headed Decorah. (It will be remembered that Old Decorah had a brother Choukeka, also called Spoon Decorah). Spoon Decorah was born at his father's village near the mouth of the Baraboo river, Wisconsin. In March, 1887, Dr. Reuben G. Thwaites had an interview with him. He was then 'living with his aged squaw,' whose name, it is said, was Gray Eagle-eye. 'His progeny, reaching to the fourth generation, were clustered about the patriarchal lodge in family wigwams.' He could only converse in his native tongue. He related, 'In 1840, we were all moved to the Turkey river [Iowa]; but in the spring our party went to Iowa [Upper] river, where Little Decorah had a village. We went down soon afterwards to the Turkey river to get our ammunition, but for some reason perhaps because we had moved to Iowa river without the consent of the agent we couldn't get any.' He then went back to Wisconsin, where he died October 13, 1889, in a cranberry marsh, near Necedah. It is said that he was about eighty-four years old when he died." (Hexom, 35-36)

Spoon himself says, "I was born at my father's village near the Caffrey schoolhouse at the mouth of the Baraboo River, a few years before the Tecumseh war." This was the Lower Barribault (Baraboo) Village, No. 1 (43.528053, -89.572360), near Portage, Wisconsin. (Thwaites, 448; Kinzie Census Rolls)

"In 1840, we were all moved to the Turkey river [Iowa]; but in the spring our party went to Iowa [Upper] river, where Little Decorah had a village." (Thwaites, 455)

Sometimes this Spoon Decorah is confused with his paternal uncle Spoon, after whom he was likely named.

Is Spoon your ancestor? Please don't go away!

ask our community of genealogists a question.
Sponsored Search by Ancestry.com
DNA Connections
It may be possible to confirm family relationships with Spoon by comparing test results with other carriers of his ancestors' Y-chromosome or mitochondrial DNA. However, there are no known yDNA or mtDNA test-takers in his direct paternal or maternal line. It is likely that these autosomal DNA test-takers will share some percentage of DNA with Spoon: 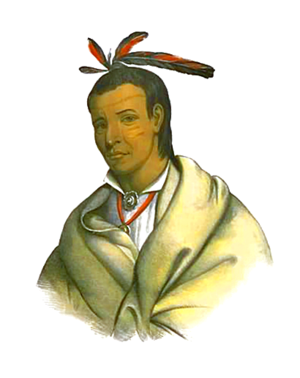 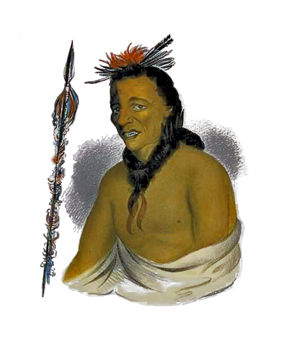 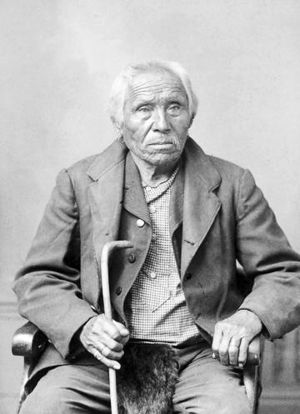