Wadge-hut-ta-kaw is a rough approximation to Wajᵋxetega, which is from wač, "boat, canoe"; xete, "large, big"; and -ga, a definite article used in personal names. The /č/ in wač, is softened to /jᵋ/ before a consonant; and the /x/ represents a palatal /k/.

"The Winnebagoes explain the origin of Big Canoe's name by the following story: One time when the Winnebagoes were encamped on the shores of a great lake or bay, a French party visited them and asked for assistance in fighting the English. A large number of warriors responded and were transported across the water in large boats. On their arrival at their destination, they saw a large encampment of soldiers, which the Indians were informed were British prisoners. The next evening a body of English troops appeared in sight and, not knowing that their comrades were prisoners, they came to re-inforce them. Hearing of the surrender, the English dropped anchor, and as it was already dark, laid off for the night. About midnight, Big Canoe with four companions suddenly snuck up to the boat in their canoes. Boarding the troop ship, the English believed they constituted a large surprise party and surrendered to them.

The red coats were taken in charge by the French, who bestowed upon the Big Canoe an officer's uniform and other tokens of their appreciation of his services. From this event, the Chieftain was given his name, Watch-hat-ta-kaw, meaning Big Canoe." (Jipson, 228-229; Dieterle)

"He was born about 1772, and was fifteen years of age when his father settled at La Crosse. He aided in the capture of Mackinaw, July 17, 1812, and was with the British in the attack on Fort Stephenson, August 2, 1813, near Fremont, Ohio, and with McKay at the capture of Prairie du Chien. It is said that he signed the treaty there in 1825. The act for which he became celebrated was the capture of Black Hawk and the Prophet, in 1832." (Hexom, 24)

"He died near Tunnel, Monroe County, at the advanced age of ninety-two years." (Draper, note at 297)

Is Wajᵋxetega your ancestor? Please don't go away!

ask our community of genealogists a question.
Sponsored Search by Ancestry.com
DNA
No known carriers of Wajᵋxetega's ancestors' DNA have taken a DNA test. 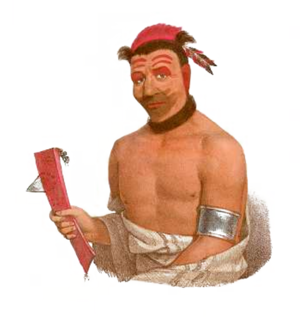