Name and Signature on Treaties

"Little Decorah['s] ... Winnebago name is given as "Maw-hee-coo-shay-naw-zhe-kaw," which Mr. Kingsley interprets as "The pillar that reaches the clouds." The following treaties were signed by Little Decorah: November 1, 1837, Washington, D. C., as "Ma-hee-koo-shay-nuz-he-kah, (Young Decori);" October 13, 1846, Washington, as "Maw-hee-ko-shay-naw-zhee-kaw;" February 27, 1855, Washington, as "Maw-he-coo-shaw-naw-zhe-kaw, "one that Stands and Reaches the Skies, or Little Decorie;" April 15, 1859, Washington, as "Little De Corrie;" March 1, 1865, Washington, as "Little Dacoria." It is probable that "Little Decorah" is simply another term for Decorah, Junior." (Hexom, 35) Lurie (69, #100) renders his name as Maxikušenazigǝ, "Standing High as a Cloud." Paul Radin collected two versions of this name in his list of "Bird Clan" (Upper Moiety) names: Mąxik’ušenąžįk’a, "Reaches the Sky Standing," and Mąxik’ušinąžįk’a, "He who Stands Beyond the Sky." (Radin, 222) The name is from mąxi, "cloud, sky"; k’uše, "to reach"; nąžį, "to stand"; and -ga, a definite article used in personal names: "He Stands Reaching the Sky/Clouds."

"Little Decorah was of medium height, five feet, eight or ten inches, and was chunky and fleshy. It is said that he was slow of action and speech, but possessed a mild and kind disposition and was very sensible. He belonged to the Cloud clan. Little Decorah died near Tomah, Wis., April 1, 1887, about 100 years old." (Hexom, 35-36) A Cloud Clan is unattested, but given the fact that his name is Decora, he will have been a member of the Thunderbird Clan as were his male ancestors.

Jipson (227) says, “Little Decorah was a man of excellent judgment, mild disposition and was always friendly to the whites. During the Sioux disturbances in 1862, Little Decorah, whose village was about five miles west of the Blue Earth Agency, was alluded to in the following statement:

“Little Decorie, a noble Indian, said that night when watching the
sky, which was lighted up from the burning of New Ulm, that he had
no fears for himself nor for the old men, but if the Sioux came, he
did not know about all the young men; as for himself he would be
found dead at a white man’s door.”

"This chief established a village on the Iowa river (Upper Iowa) in 1840, and it is thought that he was about forty years old while here. Antoine Grignon, who was acquainted with him, says, "Little Decorah spent very little time in Iowa but lived mostly in the region of Portage, Wis." He belonged to the Mississippi river bands of Indians. Waukon Decorah and Little Decorah had separate camps on the Upper Iowa river." (Hexom, 36) Just before he died, he had a village near Millston, Jackson County, Wisconsin. (Paquette, 429)

Old Gray-Headed Decora had two sons that whites referred to by the appellation "Little Decora." The appellation "Little" was used by the whites, the individuals so called being known to their tribe by their HoChunk names. The eldest son of Old Gray-Haired Decora, Cha-ge-ka-ka Decora, was also known as "Little Decorah," but he died shortly after succeeding his father as chief, both dying in 1836. He was replaced in that capacity by his brother Big Canoe. His fifth and youngest son was the one who was most famously known as "Little Decora."

Is Little your ancestor? Please don't go away!

ask our community of genealogists a question.
Sponsored Search by Ancestry.com
DNA Connections
It may be possible to confirm family relationships with Little by comparing test results with other carriers of his Y-chromosome or his mother's mitochondrial DNA. However, there are no known yDNA or mtDNA test-takers in his direct paternal or maternal line. It is likely that these autosomal DNA test-takers will share some percentage of DNA with Little:

Little Decora, by R. A. Lewis 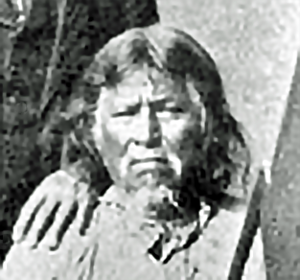