Her Hocąk name is given as KahNooRayWinKah (1910 census), which appears to be for Kanurewiga, of unknown meaning.

Her daughter Dora's marriage license to William Smith showed that her actual father was King Thunder, a well known person among the Wisconsin Winnebago. She, however, gave her name as "Miss Dora Lowe," the surname being that of her parents, but generally not used by her father, King of Thunder. Later censuses describe her as a "des[erted] wife". This is the result of Anglo authorities trying to suppress multiple marriages, which forced the husband to "desert" one of his wives. Nevertheless, in 1895, Mary is found living next to King Thunder. (1895 Wisc. census)

Casselman says (p.11): "John Stacy is of the Bear clan, one of Those-who-are-on-earth, and that Mrs. Stacy, a sister of King-of-Thunder, is of the Thunderbird clan, one of Those-who-are-above." So John Stacy and King of Thunder are brothers-in-law. This makes King of Thunder's sons and daughter's the nephews and nieces of John Stacy and his wife. In fact, the 1910 Federal census shows that Dora, Minnie, and Theodore, the children of Mary T. Lowe, were living with Martha and John Stacy, and are recorded as being their nieces and nephew.

The known children of Mary T. Lowe are the following (Jones, et alia):

She died sometime before 1929, since she is missing from that census. 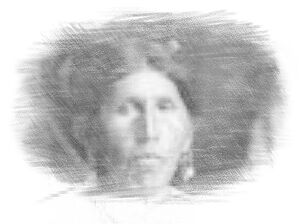