Her Hocąk name was WaConChaSkaWinKah, which is for Wakąjáskawįga, "White Thunderbird Woman", an attested name in the Thunderbird Clan. This is from Wakąjá, "Thunderbird"; ska, "white"; -wį-, a feminine gender infix; -ga, a definite article suffix used in personal names.

Her birth order name was UkSeKaHoNoNeeKah, which is for Aksigáxųnųnįka, "Sixth Daughter". (1905 census)

In 1905 Fannie Decorra and George Miner had been next door neighbors, and in 1916 they decided to get married. They had a son John (b. 1917) together, who apparently died before 1925. In 1924 they had a daughter Vernidine. George and Fannie divorced around 1925.

Her second marriage was to James J. Decorah (b. 7 May 1902) of Winnebago, Nebraska, the son of John C. Decorah and Lilly [Lucy] White. They were married in Decorah, Iowa in 1939. (Marriage Record)

Her sister Emma says, “[She and her sister Fannie] make baskets, and we bring the black ash that we make them from, clear from Stevens Point. All kinds of baskets: market, lunch, picnic, clothes and all styles of baskets we make. They’re nice, too.” (CL 10a)

1938 — her sister Emma mentioned, “My sister Fannie was born on the old Indian hunting grounds near Stoughton. … Fannie lives at the Black Bridge, too, and I live on part of her ground in a small house and have a little garden.” (CL 10a)

Is Fannie your ancestor? Please don't go away!

ask our community of genealogists a question.
Sponsored Search by Ancestry.com
DNA
No known carriers of Fannie's ancestors' DNA have taken a DNA test. 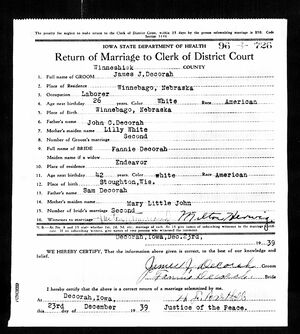