Daniel Defoe is Notable.
Daniel Defoe was an English trader, writer, journalist, pamphleteer, and spy, most famous for his novel Robinson Crusoe.

Daniel Defoe, was an English trader, writer, journalist, pamphleteer and spy, now most famous for his novel Robinson Crusoe. Defoe is notable for being one of the earliest proponents of the novel, as he helped to popularise the form in Britain and with others such as Samuel Richardson, is among the founders of the English novel. A prolific and versatile writer, he wrote more than five hundred books, pamphlets and journals on various topics (including politics, crime, religion, marriage, psychology and the supernatural). He was also a pioneer of economic journalism.

Daniel Foe (his original name) was probably born in Fore Street, in the parish of St. Giles Cripplegate, London. Defoe later added the aristocratic-sounding "De" to his name and on occasion claimed descent from the family of De Beau Faux. His birthdate and birthplace are uncertain and sources offer dates from 1659–1662, with 1660 considered the most likely.

In Defoe's early life, he experienced some of the most unusual occurrences in English history: in 1665, 70,000 were killed by the Great Plague of London and next year, the Great Fire of London left standing only Defoe's and two other houses in his neighbourhood. In 1667, when he was probably about seven, a Dutch fleet sailed up the Medway via the River Thames and attacked the town of Chatham in the raid on the Medway. His mother Annie had died by the time he was about ten.

He became a merchant and participated in several failing businesses, facing bankruptcy and aggressive creditors. He was also a prolific political pamphleteer which landed him in prison for slander. Late in life he turned his pen to fiction and wrote Robinson Crusoe, one of the most widely read and influential novels of all time.

Daniel Defoe died on 24 April 1731, probably while in hiding from his creditors. He was interred in Bunhill Fields, London, where a monument was erected to his memory in 1870.

Defoe is known to have used at least 198 pen names

ask our community of genealogists a question.
Sponsored Search by Ancestry.com
DNA
No known carriers of Daniel's DNA have taken a DNA test. 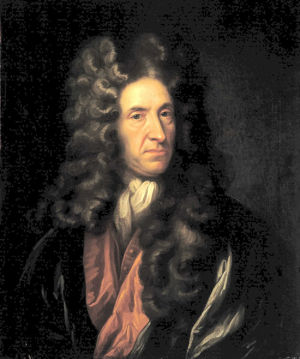 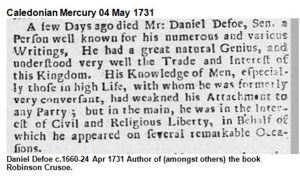 Leave a message for others who see this profile.
There are no comments yet.
Login to post a comment.
Pauline Layton
DeFoe-171 and Defoe-89 appear to represent the same person because: both born about 1660 in London, same wife Mary Tuffley, died 24 Apr 1731 in London, England
posted Apr 24, 2020 by Pauline Layton

Daniel is 16 degrees from Donald Howard, 18 degrees from Julia Howe and 17 degrees from Henry VIII of England on our single family tree. Login to find your connection.