Alice (Deincourt) Boteler was a member of aristocracy in England.

Born on 25 February 1404 Alice Deincourt was a daughter of Sir John Deincourt, 5th Lord Deincourt and his wife, Joan Grey. [1][2]

Sometime before 31 August 1422 she married William Lovel, 7th Lord Lovel of Titchmarsh, son of John Lovel, 6th Lord Lovel of Titchmarsh and his wife, Eleanor Zouche. [3] Only a month or so after her wedding Alice's only brother, William, died childless, [4]leaving Alice and her sister, Margaret, their father's joint heirs. Alice and William were the parents of four sons, John, William, Robert and Henry. [2] After more than 30 years of marriage William died 13 June 1455.[5]

Alices' sister, Margaret, died childless on 15 September 1454 leaving Alice as sole heir to the Barony of Deincourt. [6] Complete Peerage dates Margaret's death a year later. [7] It is unclear whether Alice or her heirs ever claimed the title.

The disharmony in England due mainly to the ineffectual rule of Henry VI broke out into armed warfare with the first Battle of Stoke in May 1455. Henry's Lancastrian army was soundly defeated by the Yorkist rebels led by Richard Duke of York. [8] Times were difficult for men like her Lancastrian son, John.

It was eight years before Alice married again taking another Lancastrian, Ralph le Boteler, Baron Sudeley, son of Thomas le Boteler and his wife, Alice Beauchamp as her second husband in 1463.[9] They had no children. She probably spent much of her married life at Sudeley Castle which Ralph had begun building after he had inherited the previous castle in 1442. [10] 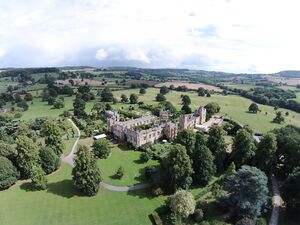