Sara Delano was the mother of the thirty-second President of the United States, Franklin Delano Roosevelt. She is the daughter of Warren Delano and Catherine Lyman

Sara was born at the Delano Estate in the Town of Newburgh, New York to Warren Delano, Jr. and Catherine Robbins Lyman. Sara had ten siblings, two of whom died as small children. Three more died in their twenties.

In 1862, Sara, her mother Catherine, and six brothers and sisters traveled to Hong Kong on the clipper ship Surprise, where they joined Warren Delano who had resumed his business of trading in opium, then still legal.[1] ↵On board ship, Sallie enjoyed spending time in the sailmaker's loft listening to the sailmaker tell sea stories. Her brother Fred discovered Catherine's journal of the voyage many years later, in 1928.[2]﻿

Sara Delano was described as a slender 5'10" (178 cm), and an intelligent debutante beauty in her youth.

She lived to see her only child elected President of the United States three times. His first election took place about thirteen years after the Nineteenth Amendment was ratified, and Sara became the first Presidential mother to vote for her son. Sara continued to support her son's career, even standing in as First Lady on several occasions. She was always prepared to say something positive about her son, and remained highly protective of him and his family.

Sara Delano Roosevelt, with the President at her side, died on September 7, 1941, 230 days after her son's third inauguration as President, exactly three months before the Japanese attack on Pearl Harbor, and two weeks before her 87th birthday.[3] ↵"Minutes after her death, the largest oak tree at Hyde Park toppled to the ground. It was a clear windless day." (Quoted from; The American Experience: FDR (Part IV; "The Juggler" 1940-1945) (1994), Written & Directed by David Grubin).

The funeral was held at her home in Springwood, which is located in Hyde Park, New York. Her memory is commemorated with the Sara Delano Roosevelt Park in New York City's Lower East Side, which was dedicated during her lifetime, in 1934. [1]

Sponsored Search by Ancestry.com
DNA
No known carriers of Sara's DNA have taken a DNA test. 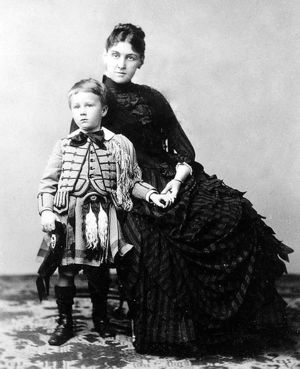 Robin Lee
Delano-1228 and Delano-4 appear to represent the same person because: mother of the president
posted Aug 02, 2017 by Robin Lee

Robin Lee
Delano-288 and Delano-4 appear to represent the same person because: while birth is off by one year, per the Geni source it was intended to be the same person.
posted Oct 05, 2016 by Robin Lee