He became famous in Europe for his melodramatic depictions that often portrayed subjects from English and French history. The emotions emphasised in Delaroche's paintings appeal to Romanticism while the detail of his work along with the deglorified portrayal of historic figures follow the trends of Academicism and Neoclassicism. Delaroche aimed to depict his subjects and history with pragmatic realism. He did not consider popular ideals and norms in his creations, but rather painted all his subjects in the same light whether they were historical figures, founders of Christianity, or real people of his time like Napoleon Bonaparte and Marie-Antoinette. Delaroche was a leading pupil of Antoine-Jean Gros and later mentored a number of notable artists like Thomas Couture, Jean-Léon Gérôme, and Francisque Millet.

Delaroche was born into a generation that saw the stylistic conflicts between Romanticism and Davidian Classicism. Davidian Classicism was widely accepted and enjoyed by society so as a developing artist at the time of the introduction of Romanticism in Paris, Delaroche found his place between the two movements. Subjects from Delaroche’s medieval and sixteenth and seventeenth-century history paintings appealed to Romantics while the accuracy of information along with the highly finished surfaces of his paintings appealed to Academics and Neoclassicism.

Delaroche’s works completed in the early 1830s most reflected the position he took between the two movements and were admired by contemporary artists of the time—the Execution of Lady Jane Grey (1833; National Gallery, London) was the most acclaimed of Delaroche’s paintings in its day. Later in the 1830s, Delaroche exhibited the first of his major religious works. His change of subject and “the painting’s austere manner” were ill-received by critics and after 1837, he stopped exhibiting his work altogether. At the time of his death in 1856, he was painting a series of four scenes from the Life of the Virgin. Only one work from this series was completed: the Virgin Contemplating the Crown of Thorns.

He was born into the petty lord de la Roche family, a family of artists, dealers, collectors, and art administrators. His father, Gregoire-Hippolyte Delaroche, was a prominent art dealer in Paris. Paul Delaroche was the second of two sons and was introduced to fine art at a young age.

At age nineteen, Delaroche was afforded by his father the opportunity to study at L'École des Beaux-Arts under the instruction of Louis Étienne Watelet. Delaroche was influenced by his father to focus on landscapes while he was at L’École because his brother, Jules-Hippolyte Delaroche, already focused on painting history. After two years at L’École, Delaroche voiced his disinterest in landscapes and acted on his overall disagreement to the French academic system. He left L'École des Beaux-Art in at the end of 1817.

In the year 1818, Delaroche entered the studio of Antoine-Jean Gros (who was trained by David, yet found his greatest success in his un-Davidian productions of contemporary history) where he could pursue his greater interest of history painting. His fellow pupils included Richard Parkes Bonington, Eugene Lami and Camille Roqueplan.

Delaroche made his debut at the Salon in 1822 with his painting Christ Descended from the Cross (1822; Paris, Pal. Royale, Chapelle) and Jehosheba Saving Joash (1822; Troyes, Mus. B.-A. & Archeol.). The latter Delaroche paintings clearly showed the influence of Gros, and it was greatly praised by Gericault. At the same Salon, Delacroix exhibited Dante and Virgil in Hell (1822; Paris, Louvre), a highly influential painting, which could be said to mark the arrival of Romanticism in Paris, challenging the dominance of Neo-classicism. Delaroche’s response to this conflict of influences was to steer a course between the two currents, unwilling to opt for full-blooded Romanticism for fear of jeopardizing his public standing. Such a compromise can be seen in one of his entries for the Salon of 1824, Joan of Arc in Prison (1824; Rouen, Mus. B.-A.; sketch and reduced replica, London, Wallace), and it was the distinguishing feature of his subsequent paintings.

In 1828 Delaroche exhibited his painting Death of Queen Elizabeth, the first of a series of paintings from English history that traded on the growing French interest in English culture; this Delaroche painting established the artist’s reputation. Centred upon the very masculine figure of the dying Queen, the painting’s obsessive attention to details, such as the rendering of different rich materials, creates a grotesque contrast between the shrivelled, haggard monarch and her resplendent surroundings.

In 1830 Delaroche was commissioned to paint the Storming of the Bastille, a large and important oil painting for the Hotel de Ville (destroyed when the Hotel was burnt down during the Commune in 1871).

Delaroche is best known today for his painting “The Young Martyr”, in the collection of the Louvre, Paris.

ask our community of genealogists a question.
Sponsored Search by Ancestry.com
DNA
No known carriers of Paul's ancestors' DNA have taken a DNA test. 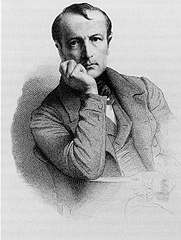 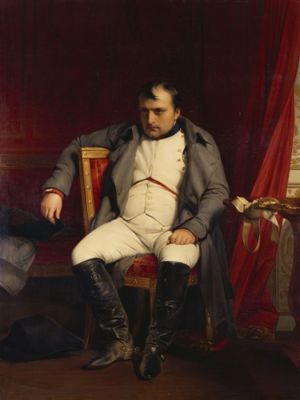 Peter the Great of Russia, painted by Hippolyte Paul Delaroche 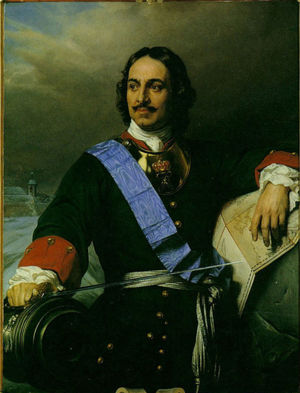 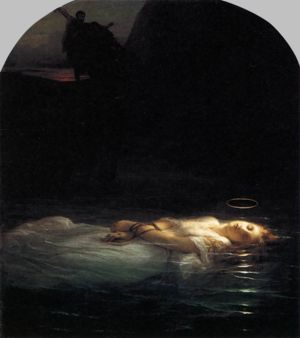