Pope Julius II (5 December 1443 – 21 February 1513), nicknamed "The Fearsome Pope" and "The Warrior Pope", born Giuliano della Rovere, was Pope from 1 November 1503 to his death in 1513. His papacy was marked by an active foreign policy, ambitious building projects, and patronage for the arts.

Giuliano della Rovere was the son of Rafaello della Rovere. Francesco della Rovere (later Pope Sixtus IV) was his uncle. In 1483, an illegitimate daughter was born, Felice della Rovere. Spouse: Lucrezia Normanni (mother of Felice). He died of fever in February 1513. Julius was buried in St. Peter's in the Vatican.

Is Pope Julius II your ancestor? Please don't go away!

ask our community of genealogists a question.
Sponsored Search by Ancestry.com
DNA
No known carriers of Pope Julius II's ancestors' DNA have taken a DNA test. 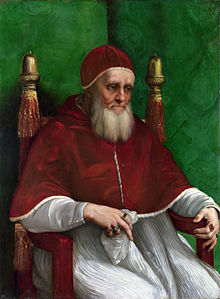