William Dent was born about 1660 in St. Mary’s County, the eldest son of Thomas and Rebecca (Wilkinson) Dent. [1]

William became an attorney, and began a life of public service. [2]

On February 8, 1684 he married Elizabeth Fowke, the daughter of Anne Chandler Fowke and the deceased Colonel Gerard Fowke by the Rev. John Turnlinge, first rector of Durham Parish. [1]

He married Elizabeth Brooks, and then Elizabeth Fowke, the daughter of Col. Fowke and Ann Thorowgood, on 08 February 1683/84 in Charles Co.. [2]

He served in the early Indian wars and was known as Col. William Dent. [2]

William Dent maintained a store at his Nanjemoy Plantation, acquired vast amounts of lands and maintained a home in Annapolis. [1]

He amassed quite a lot of property, and his worth was considerable. His properties included a plantation on the Nanjemoy in Charles Co, a townhouse in Annapolis, well-stocked plantations on the Mattawoman in Prince Georges Co, and another farm at Port Tobacco Cliffs. [2]

He gave the Communion Silver still in use at Durham Church inscribed “The Gift of William Dent, Esq., to Durham Parish.” He was the father of nine children, two of whom are buried in the Durham Church Cemetery (Gerard Dent and Anne Dent).[1]

William Dent died in 1704 [2] leaving at least 6,000 acres of property. At the time of the writing of his will he had bequeathed to wife Elizabeth the homestead at Nanjemoy and a life interest in the mill and the following tracts of land: “St. Barbay’s,” “Wheelers’ Palm,” and “Thomkinson’s Long Look For,” all of which were to revert to their youngest son Philip. [1]

In codicil of 1 Mar, 1703/4: All my effects shall be drawn into Jonathan Mathers of London hands, .if he be dead, my Estate shall be settled in the hands of Captain John Hyde, Merchant in London. Effects I have at Liverpool, in the hands of Mr. Rich Hughton. Whereas Governor Blackstone gave me a silver Monteth bowle with my Coate of Arms and an Inscription Ingraven and I give it to Thomas Dent for ever.

Peter Dent's will directs that his daughter Rebecca of Jane, is to live with grandfather Joseph Gray. Rebecca inherits “Taunton” in St. Mary’s County, Maryland.

The children of Col. William Dent and his wife, Elizabeth Fowke are: 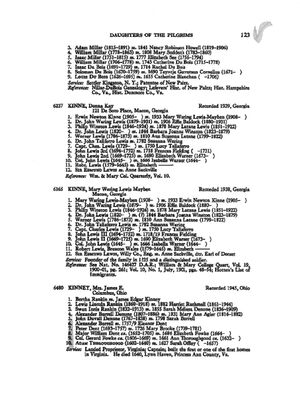 Darlene (Athey) Athey-Hill
Was he actually married to Jane Pittman, or did he just have a child by her? If the latter, she should be detached as wife with a note in the biography as to their relationship (with link to her profile).
posted Mar 29, 2020 by Darlene (Athey) Athey-Hill
Barbara (Gray) Cutter
My understanding per sources is they were married.
posted Mar 30, 2020 by Barbara (Gray) Cutter