Hugh is a descendant of the Bigods (see text, below).

Hugh (Despenser) le Despenser was a member of aristocracy in the British Isles.

“Hugh was the notorious favourite of Edward II, king of England 1307-1327. He used the king’s infatuation with him to make himself the de facto ruler of England for much of the 1320s, and the richest man in the country, until his execution at Hereford in November 1326....Nothing in Hugh’s early life gives a hint of his later notoriety. He was born sometime between 1286 and 1290 (by way of comparison, Edward II was born in 1284)...."[2]

His son Hugh survived the 1326 defeat (and executions) of Hugh and his father, who had stood with Edward II against an uprising led by Edward's wife Queen Isabel and her consort, Roger Mortimer. The 1326 invasion of England by Isabel and Mortimer "led to the capture of Hugh Despenser the Younger and the abdication of Isabella's husband, Edward II".[4] Edward III, Edward II's eldest son, was crowned King of England in January 1327 and "is noted for his military success and for restoring royal authority after the disastrous and unorthodox reign of his father".[5]

For information about his military and political life, see the biography that Wikipedia maintains for him.[7]

Isabel and her first husband, Patrick de Chaworth, had one daughter:[3]

Eleanor, born in Caerphilly, Glamorgan "shortly before 23 Nov. 1292 (date of her mother's churching)", was the daughter of Gilbert de Clare, Knt., Earl of Gloucester and Hertford, by his wife Joan of Acre, daughter of Edward I, King of England.[1]

Hugh and his wife Eleanor had five sons and five daughters:[1][15]

Aside from Hugh being eldest son and Gilbert the second, the order of their children's birth is not known.[18]

"Hanged; then, his head was set up on London Bridge, his quarters were hung up at Dover, Bristol, York, and Newcastle. His parts were eventually collected and buried at Tewkesbury Abbey, Gloucestershire."[10][19]

"The execution of Hugh Despenser the Younger can be seen in the background." (from the caption for the illustration on Wikipedia's "The Aftermath of the Despenser War")

Click the Changes tab to see edits to this profile; from that list, click WikiTree IDs other than Despenser-6 to see changes to those profiles prior to being merged. Thank you to everyone who contributed to this profile.

Among the many Gateway Ancestors who descend from Hugh le Despenser are St Leger Codd, Edward Digges, John Fisher, and Katherine St Leger. Most of these are on a badged trail through Hugh's grandson, and now through Hugh and his daughter, Isabel. ~ Noland-165, 12 Jan. 2020

The profiles on Hugh's trail to the Bigods are all badged:

Status of trails from Gateways mentioned above:

Sponsored Search by Ancestry.com
DNA
No known carriers of Hugh's DNA have taken a DNA test. 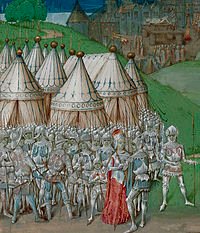 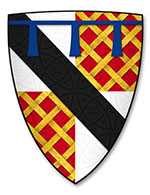 Hugh is the 7th great grandfather of Thomas (Confident)

This makes Hugh the seventh great grandfather of Thomas.

But they got left out of the reviewing and badging, so the Bigods are commented out in the Base Camp entry for Digges.

Descents to Katherine St Leger and St Leger Codd are also badged up.

Liz (Noland) Shifflett
Thanks Andrew - I agree. It's back to just location & I copied what had been there to the profile's #Death section.

Gillian Thomas
Hi April and Liz. Thanks so much for responding so quickly. I also appreciate the work you and others have done on the profile. Its really well done.
posted Nov 24, 2017 by Gillian Thomas

April (Dellinger) Dauenhauer
The village of Hanley Castle, Worcestershire, birthplace of Hugh le Despenser, might be the answer to Gillian's request for a more specific category than just Worcestershire.

Winstone, Gloucestershire would be another appropriate category, for Hugh purchased a manor there, and presented to the church there.

According to Richardson, Hugh le Despenser owned manors and lands in many locations, including Herefordshire (Hertford not the same place).

The powerful, historic lords of England such as the Despensers owned such large swaths of land -- entire counties, in fact, that while for most people a particular town would be named in a category, for these lords, naming an entire county would be accurate for their time in history.

I hope this helps clear up the category issue:)

Hugh is 24 degrees from Mary McCauley, 25 degrees from B. W. J. Molier and 8 degrees from Henry VIII of England on our single family tree. Login to find your connection.