Penelope Devereux was an English noblewoman and courtier, the eldest child of Walter Devereux, 1st Earl of Essex, and his wife Lettice Knollys. Though no certain portrait survives, she was a striking woman with blonde hair and black eyes.[1]

Born in 1563 at Chartley in Staffordshire, on her father's death in 1576 she was placed under the guardianship of Henry Hastings, 3rd Earl of Huntingdon. He raised her and had her well educated at his home in Leicestershire. In January 1581 she joined the royal court as a maid of honour to Queen Elizabeth I but by November 1581 was a wife, having married Robert Rich, later 1st Earl of Warwick.[1][2][3] She still attended court, keeping in close touch with her mother, who had remarried in 1578, and her brother Robert Devereux, 2nd Earl of Essex.[1]

At court, the poet Philip Sidney had fallen in love with her, and included many references to her in his works,[2] though there's no evidence they became lovers. In 1586, while he was dying, he renounced her. After his death his widow married Penelope's brother, so the two families were close.[1]

With her husband Robert Rich she had five (or seven) children, four of whom survived, the last being born in August 1590. By November 1590 it was public knowledge that she was having an affair with Charles Blount, later 1st Earl of Devonshire. They had five (or six) children,[2] all brought up with her existing family, though their father set up generous trust funds for the five who survived.[1]

With a husband, a lover and a brother who were all powerful men in England at the time, she herself wielded considerable influence. When her brother was disgraced in 1599, she sprung to his defence and incurred the antipathy of the queen. When his attempted coup in 1601 failed, followed by his execution, she was arrested and interrogated but released.[1]

Once King James I followed Elizabeth, Penelope quickly became friends with his wife, Queen Anne,[1] and in 1603 the king granted her the succession to her nephew's earldom of Essex.[2][1] In that year her lover, returning to England after three and a half years fighting in Ireland, was made Earl of Devonshire.[1]

In November 1605 her husband obtained a divorce on grounds of her acknowledged adultery with an unnamed man.[1][2] Though English law did not allow remarriage while the former spouse was alive, in December 1605 she married her lover privately at a ceremony performed by the future archbishop William Laud.[2][1] Three months later, in April 1606, he was dead (aggravated by heavy smoking), and in July 1607 she followed him. Her divorced husband remarried in 1616 and died in 1619.[1][2]

Her surviving children with Robert Rich were:

Her surviving children with Charles Blount were:

"His eldest son Richard having predeceased him without issue in 1580, he was succeeded by his second son Robert, the third baron, who, in 1582, presented John Pratt to the rectory. At Pratt's death Rich allowed Queen Elizabeth to present 'by lapse' David Dee in 1587; but he again exercised the patronage in 1605, when he presented Dr. Westfield. This Lord Rich held puritanical views. He was associated with the queen's favourite, Walter Devereux, Earl of Essex, in most of his successes, and married the earl's sister, Penelope Devereux, in 1580, which led to much unhappiness as she was in love with Sir Philip Sidney. It was to her that Sidney's sonnets 'Astrophel and Stella' were addressed. After Sidney's death she lived in open adultery with Lord Mountjoy, whom she married after she had been divorced by Rich. In 1616 Lord Rich, on the 14th December, married, at St. Bartholomew the Great, Frances, the daughter of Sir Christopher Wray, and widow of Sir George St. Paul. He was created Earl of Warwick in 1618 and died the next year. [5]

"Father Gerard further states that, "Besides others of less standing whom she (fn. 3) brought me to be reconciled, she had nearly won over a certain great lady, (fn. 4) a neighbour of hers. Tho' this lady was the wife of the richest lord in the whole county & sister to the Earl of Essex (then most powerful with the Queen) and was wholly given to vanities, nevertheless she brought her so far as to be quite willing to speak with a priest if only he could come to her without being known."[6]

Unto A Lady, by Mildmay Fane, 2nd Earl of Westmorland

Is Penelope your ancestor? Please don't go away!

ask our community of genealogists a question.
Sponsored Search by Ancestry.com
DNA
No known carriers of Penelope's DNA have taken a DNA test. 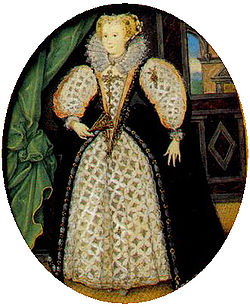 Jo Fitz-Henry
Devereux-684 and Devereux-4 appear to represent the same person because: Another duplicate profile of Penelope (Devereux) Rich - her husband is also duplicated
posted Jan 05, 2021 by Jo Fitz-Henry

Jo Fitz-Henry
Devereux-684 and Devereux-683 do not represent the same person because: These are both duplicates of Devereux-4 and should be merged independently into that profile.
posted on Devereux-683 (merged) Jan 05, 2021 by Jo Fitz-Henry

John Elkin
Devereux-684 and Devereux-683 appear to represent the same person because: their details are identical
posted on Devereux-683 (merged) Jan 05, 2021 by John Elkin

Robin Lee
I notice her daughter Penelope Rich is missing, Penelope Rich was the first wife for http://www.wikitree.com/wiki/Clifton-267.
posted Oct 21, 2014 by Robin Lee