When Nirmala Sundari Devi was born into the Brahmin family of her mother Mokshada Sundari Devi and father Bipinbihari Bhattacharya, on 30 April 1896, in the house of her grandmother's parents, in the village of Kheora, the village was in the Brahmanbaria district of east Bengal in eastern (British) India[1]. The region became East Pakistan in 1947 and then Bangladesh in 1971[2].

Her father was known for his intense devotion, particularly through the songs he sang, and his daughter's birth name in English means 'immaculate, beautiful goddess', but despite their well-regarded family heritage, they were living in poverty. Her mother was a gentle woman, totally dedicated to the welfare of her family, who was later to become Swami Muktananda Giri and accompanied her daughter, Sri Ma, on her travels[3].

From her earliest years, her happy disposition and other traits drew people like a magnet[4]. She "was fully conscious from the first day" ... "She never voiced any desire. Always happy and eager to help, she never cried, either at birth or later, except to divert her mother's grief over the premature death of her sons" (op.cit., p.xi). Her parents were worried that she was 'simple minded', but didn't understand it's true significance, neither did the teachers at the village school she attended for barely 2 years, nor, later her extended family, after she married Sri Ramani Mohan Chakravarty of Atpara in 1908, when barely aged 13, but lived with his brother's family for almost 4 years (see ref.3). The last was a period "of considerable physical hard work in an atmosphere of restrictive discipline." ... "She remained uniformly cheerful, good-humoured, and more than willing to shoulder other people's burdens. Nothing was a chore to her. Her serene and equable temper was never disrupted by thoughtlessness or unfair treatment at the hands of the elders" (ref.3). She showed boundless compassion for all life forms that came within her physical presence.

In about 1914, aged 18, she was able to live with her husband, whom she was to call Bholanath, with the consent of both families, at Ashtagram, his work place, in Bengal. "He found her surrounded by an aura of awe-inspiring sanctity, which precluded marital relationship" (ref.4, p.xi).

They moved to Bajitpur, a short distance west of Ashtagram in West Bengal, the ancestral home, birthplace, and the place of growing up and sadhana of Swami Pranavananda Maharaj (1896–1941)[5]. This was a work transfer for Bholanath and where Nirmala Sundari spent the next 6 years on many spiritual paths to perfection, although there was nothing for her that she had not already attained. In 1922 Bholanth became her formal disciple, although she never used the word 'disciple' of anyone, nor the word 'I' of herself, that would lead him to become a sannyasi (renunciant), and "on the full moon night of August 1922, at midnight, 26yrs old Nirmala enacted her own spiritual initiation" (see ref.1).

On 10 April 1924 they came to Dacca (now known as Dhaka), as Bholanath was appointed Manager of the Shahbagh Gardens belonging to the Nawab of Dacca. It was during this time that one of her devotees, Sri Jyotish Chandra Rai, known as "Bhaiji," suggested she be given the spiritual name Anandamayi Ma, sometimes written as Ananda Moyi Ma (Paramahansa Yogananda, 1946, Ch.45, pp518-524). This took place in 1925 at Siddheswari[6] in Kolkata (Calcutta) India.

Bholanath invited Anandamayi Ma's parents to come and live with them at Shahbagh, which they did, and were able to tell the ever increasing number of her devotees about her childhood. However, in 1927 Sri Ma and her husband started travelling, going out of Bengal, visiting places of pilgrimage, and were seen less often at Dacca. Her followers built an ashram for her in 1929, but in 1932, and joined by Bhaiji, they moved out altogether (ref.3 & 4). Sri Ma had been on a tour of South India in 1930 with her father, mother, husband and others.

At first they went to Dehradun, north of Delhi, in the foothills of the Himalayas, moving northwest to start the Kishenpur Ashram in 1936 (ref.4, p.xii), where her husband Bholanathji passed away in 1938. Bhaiji had died in the previous year, on 17 August 1937 in Almora. She did not show any grief when Bholanathji passed over, which is entirely consistent with Sri Ramana Maharshi's explanation.

Prior to their departures, Paramahansa Yogananda (birth name Mukunda Lal Ghosh) met with her in December 1936 in Calcutta, when he was on his last trip back to India, together with his devoted Secretary, Clarence Richard Wright. Yogananda translated her spiritual name as 'Joy-Permeated Mother' though in English she was also known as the 'Blissful Mother'. When they first met she addressed Yogananda in Bengali by the statement "Father you have come", and always used that name for him! What did she imply by it? was she using it in the same way as Jesus had?

A devotee told Mr Wright that Ananda Moyi Ma took no notice of her body, and had to be fed to ensure she ate. She told Yogananda when she went to Ranchi to meet him again:- "My consciousness has never associated itself with this temporary body. Before I came on this earth I was the same. ... I shall [always] be the same" (Paramahansa Yogananda, 1946, p.522).

The rest of her earthly life was spent on "ceaseless peregrinations throughout India, ... [giving] ... millions of Indians and hundreds from abroad darshan." ... "She never delivered lectures but replied to questions ...[with] ... spontaneous, unhesitating answers that hit the point directly" (ref.4, p.xii). She had a message for people of all walks of life.

On 20 October 1952, she departed "for the South India tour from Puri Ashram along with Hari Baba, Avadhootji and others. Special reception in Madras, Meeting with Mother in Sri Aurobindo Ashram at Pondicherry. Visit to the ashram of Maharshi Ramana at Tiruvannamalai. Visit to Rameswar, a sadhaka in astral body accompanies Ma to Rameswar for darshana. Public reception of Ma in Bangalore" (see ref.6). On 26 January 1953, "Ma returned to Vindhyachal after visiting Kanyakumari. Pandharpur, Pune, Bombay. Ahmedabad, Junagadh, Prabhas, Poirbunder, Dwarka, Rajkot, Morvi, Bhavnagar. Baroda."

On 9 August 1970, Srimati Mokshada Sundari Devi Bhattacharya, who became Swami Muktananda Giri but was usually called Didima or Giriji, Sri Ma's mother, "suddenly leaves her body at about 1-30 a.m., in Ma's presence at Jaipuria House on the bank of Ganga. Body given samadhi in the precincts of the Ashram at Kankhal under the guidance of Mahantji of Nirvani Akhara (see ref.6).

On 27 August 1982 at Dehradun, Anandamayi Ma completed her lila on this earth and assumed the immutable immanent form. On 28 August 1982, she was taken from the Kishenpur Ashram to Kankhal by road in procession. On 29 August 1982, Prime Minister Smt. Indira Gandhi arrived at Kankhal. Ma's divine body was given Mahasamadhi near the previous site of an ancient Pipal tree, under which she used to sit on many occasions and give darshan.

[A comprehensive calendar of dates and events (see ref.6) differs in some fine detail from the more widely published references used for the sources and will be used to correct the above, where needed, and add to the story of this amazing Being. Those "peregrinations" can be worked out from that data.]

[A shorter version of the section in Timothy Conway's 1995 book on Anandamayi Ma is available online[7], which suggests explanations for her behavioural characteristics.]

Is Anandamayi your ancestor? Please don't go away!

ask our community of genealogists a question.
Sponsored Search by Ancestry.com
DNA
No known carriers of Anandamayi's ancestors' DNA have taken a DNA test. 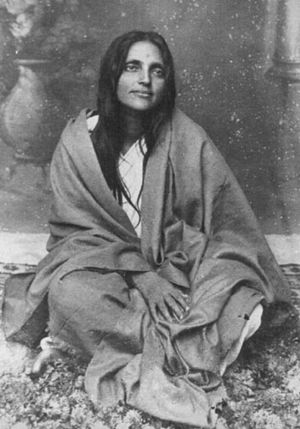