Anasuya Devi was born on 23 March 1923 at Mannava, a small village in Guntur District of Andrah Pradesh, to a pious couple late Seethapathi Rao, the village Officer of Mannava and his wife Rangamma. Her parents had lived in perfect harmony and devotion[1]but had lost as many as five children. Bess, 2009, p.69 has "five of six children".

Before Rangamma was pregnant again Seethapathi (spelt Sitipati in Bess, 2009) had a dream in which he saw a beautiful woman seated in front of him with a larger than usual vermilion mark on her forehead, who told him "I am the Mother of All". Rangamma, from the time of conception experienced unspeakable joy and excitation, and much more (see ref.1), At the time of the birth of Anasuya (meaning 'one without envy'), everyone present had miraculous experiences. Anasuya was to say later that she was fully aware at birth, and could relate precise conversations (Bess, 2009, p.70) that took place.

When nearly 3 years old, in a state of transcendental meditation, with her eyes half-closed, she was thought to have been having an epileptic fit [observed in other awakened beings], the observers not interpreting her posture correctly[2]. When barely 4 years old she stayed in a position, stiff with suspended breath for 4 days without any apparent harm to her heath (see ref.1).

Like Anandamayi Ma Devi-48, Anasuya showed little interest in food for herself, even as an infant she never cried for her milk, and as a child even passed on her food to others, whom she perceived in greater need[3].

Rangamma passed on when Anasuya was just 5 years old (Bess, 2009, p.70) and was showing her precocious nature. She then stayed with different relatives in the Bapatla, Guntur region of Andhra Pradesh.

On 5 May 1936, aged 13, she married Brahmandam Nageswara Rao at Bapatla. Sri Nagaswara Rao, also known as Nanna Garu, was the son of Sri Subba Rao and Smt Kanaka Durga (see ref.2). He was later to become the village Officer of Jillellamudi, which is approximately 10kms southwest of Mannava.

Anasuya (AMMA) and Nanna had 3 children, 2 sons and a daughter. The first born was named after his paternal grandfather, Sri Subba Rao, while their daughter was named Kumari Nyavathi, and the younger son Sri Ravindra Rao, who became a Banker. Kumari, popularly known as Hyma akkayya, was given Divinity by her mother (see ref.2).

Amma looked after the needs of her family first as a young housewife, performing her household duties, and secondarily establishing a grain bank to help the villagers' needs[4]. She became popularly known as Jillellamudi AMMA.

At one point in her married life she had the longest trance she had ever experienced, when her body died - breath and heart beat ceased, joints stiffened and complexion took on a blue-gray colour - for 11 days but she did not. Only a prior request for a doctor to be present saved her from being cremated by her family believing her to be dead (see ref.1).

1956 was the beginning of devotees coming to Jillellamudi to visit the Divine Mother, with numbers steadily increasing, so that Amma could not continue to provide the food herself but needed to establish a proper kitchen or Annapurnalayam[5]. The foundation stone was laid on 15 August 1958. The permanent building was finally inaugurated on 13 January 1963. (This also included lodgings[6].)

"Amma established a Sanskrit school in 1966 (now the Matrusri Oriental College and High School) and within a relatively short time, one could hear the inmates speaking Sanskrit fluently" (see ref.6 & [7]).

She had always asked anyone who came, "have you taken food?" She never gave any formal initiations but said "the food I give you is your Upadesha" (instruction)[9].

Amma said "My life is infinite and my history is limited."

Is Anasuya your relative? Please don't go away!

ask our community of genealogists a question.
Sponsored Search by Ancestry.com
DNA
No known carriers of Anasuya's ancestors' DNA have taken a DNA test. 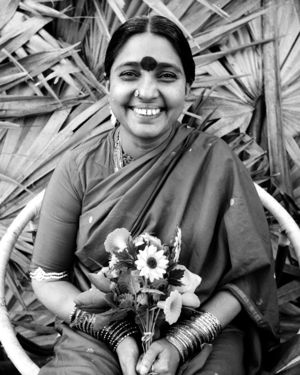