Husband of Mary A (Butler) DeWeese — married about 1863 in Indiana

Asa DEWEESE, whose name adorns both county jail and court house as one of the building commissioners, died at his home west of Fulton this (Thursday) morning, after an illness of short duration. He was approaching his eighty-eighth year. Senility and the extreme warm weather are believed the causes. Mr. Deweese was one of the county`s few remaining types of pioneers who made their homes by the work of their hands, having lived here over sixty years. He had an extensive acquaintance, being well known as a pedestrian of ability. Often he walked from his home to the city to attend a meeting of the commissioners` court in which he served two terms, being president in the second. Mr. Deweese was a progressive commissioner and many of the most important public improvements in the county are due to his idea of keeping county affairs apace with the advance of the general community. Asa Deweese, of the 1st district, was born in Miami county, O., in 1826. Three years later his parents moved to Shelby county, OH, and he lived there until 1854, when he came to Fulton county and purchased the land in Liberty township, west of Fulton, which has ever since been his home. His baggage brought to the county consisted of a gripsack, in which he carried a change of clothing, two iron wedges and a grubbing hoe, while on his shoulder he freighted an ax and a rifle all necessary appurtenances for early day farming in the heavy timber of this county. After two years work on his new farm he returned to OH and married Emeline RUSSEL. She lived but two years leaving her husband alone. Several years later he married Mary A. BUTLER and two children blessed this union, Emily, wife of Charles MARTIN of Marion, and Charles [DEWEESE], a son.

The funeral of Asa DEWEESE was held at Fletcher`s Lake Saturday. In accordance with one of his last requests, no funeral sermon was preached.

Below is from Pictorial History of America, The Fulton County Edition by Elia Peattie - published in 1896

`ASA W. DEWEESE, who was born in Miami County, OH, in 1826, is descended from sturdy ancestry, from rock-ribbed Wales, the family being foudned in Maryland. His grandfather, James Deweese, was born in Virginia, and emigrating to Pennsylvania, there married Elizabeth Whitlock. By trade he was a blacksmith. The father of our subject was born in Pennsylvania, in 1804, and, going down the OH river, settled in Fairfield County, that state. He married Amy Blue, daughter of Michael Blue, and she is now living in Peru, Ind., at the age of eighty- eight. Their children are: Asa W., Lucinda, widow of H. Bryan; Isabel, widow of William Bryan; Nancy, widow of Oliver Longstreet; Michael, deceased; Elizabeth, wife of A. Marrs; James L., of Peru, Ind.; Louisa, wife of B. Burton; Diodema, wife of Daniel Gordon; Clarinda, wife of Mat Jones; and Susanna, wife of George Rouch. Asa W. Deweese was reared and educated in Shelby County, OH, and in 1854, with an ax and rifle upon his shoulder strted for Fulton County, Ind. He secured a farm in the forest near the town of Fulton, where for two years he labored faithfully, preparing a home for his future bride. He was married May 29, 1856, to Emeline Russell whom he at once brought to the new farm, and who died two years later. Mr. Deweese was again married Jan. 1, 1863, his second union being with Mary A., daughter of Burriss H. Butler. Her father was born in Georgia, in 1806, was reared near Richmond, Ind., and came to Fulton County in 1841. Mr. and Mrs. Deweese have two children - Emily B., wife of Charles Martin, of Marion, Indiana; and Charles B., who is living at the old homestead owned by his father. This is one of the finest farms of the county, made so by the earnest labors of Asa W. Deweese, who is recognized as one of the most progressive and energetic agriculturists of Fulton County. In his political views he is a democrat, and has not failed to vote at a democratic primary or election for forty-three years. He has twice served as county commissioner, receiving a largely increased majority at his second election, which was a high testimonial of his faithful performance of duty during his first term. He retired from office in 1895, as he had entered it, with the confidence and good will of all.`

`Pictorial History of America, The Fulton County Edition` by Elia Peattie - published in 1896

Is Asa your ancestor? Please don't go away!

ask our community of genealogists a question.
Sponsored Search by Ancestry.com
DNA
No known carriers of Asa's DNA have taken a DNA test. 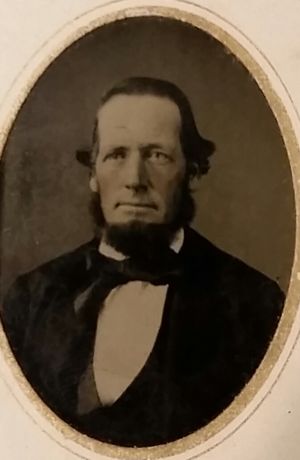