Father of Chauncey Dewey and Silas Hyde Dewey
Died about 1837 in Ohio, USA

Eliphalet DEWEY was born in 1762 in Connecticut [1] and was the son of Captain Daniel Dewey.

During the American Revolutionary War, he joined the Connecticut militia and served as a Private in his fathers Company. [2]

Eliphalet next married on 25 Aug 1793 in Franklin, Connecticut to Rachel Ann HYDE, the only daughter of Martha (WATERMAN) and Silas HYDE (or HIDE) of Norwich, Connecticut. [3]

About 1798 he moved his family from Connecticut to to Hardwick, New York and his children were educated at Hartwick Seminary. Later he moved to Cooperstown, New York.

In 1835 he moved to Cadiz, Harrison County, Ohio where he lived with his son Chauncey Dewey. Eliphalet died on 04 Jan 1837 in Ohio.

Is Eliphalet your ancestor? Please don't go away!

ask our community of genealogists a question.
Sponsored Search by Ancestry.com
DNA
No known carriers of Eliphalet's DNA have taken a DNA test. 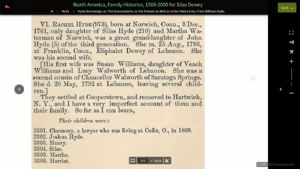 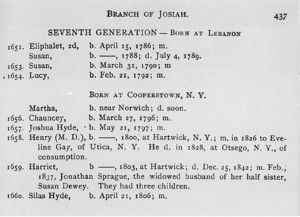 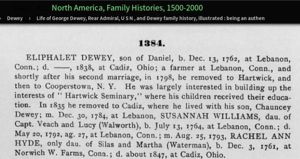 Eliphalet is 24 degrees from Ludwig Kraayenbrink, 13 degrees from Henry VIII of England and 28 degrees from Ferdinand von Zeppelin on our single family tree. Login to find your connection.