Charles Henry was born in Dorchester, Massachusetts, in 1838, the son of Asahel and Jane (Sharpe) Dewey.[1]

Charles enlisted in the Navy on December 7, 1860, when he was 22 years old.[2] He held the rank of Landsman and served aboard the USS Ohio, USS Madeonian, USS San Jacinto and USS North Carolina.[3] He was discharged from the latter vessel on February 6, 1864. On Septemer 2 of the same year, he mustered in as a Private in Company D of the 2nd Massachusetts Heavy Artillery. He mustered out at New Berne, NC, on June 26, 1865.[4]

He married Annie Frances Woods, daughter of John and Kate (Braden) Woods, in 1866.[5] They had 3 children, all born at Dorchester: [6]

By 1880, the family was living in Somerville, MA.[7] Charles was a house painter by trade.

A book on Dewey genealogy, published in 1898, notes that after his time in the military "he received injuries which have made him an almost helpless cripple."[8]

ask our community of genealogists a question.
Sponsored Search by Ancestry.com
DNA Connections
It may be possible to confirm family relationships with Charles by comparing test results with other carriers of his ancestors' Y-chromosome or mitochondrial DNA. However, there are no known yDNA or mtDNA test-takers in his direct paternal or maternal line. It is likely that these autosomal DNA test-takers will share DNA with Charles: 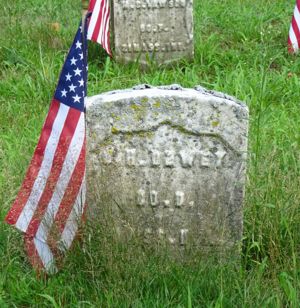 Charles is 22 degrees from Mary McCauley, 24 degrees from B. W. J. Molier and 16 degrees from Henry VIII of England on our single family tree. Login to find your connection.