Colonel Hiram Shipman Dewey was born in 1829,[1] the son of Chester Dewey and Mary TerBush. He married Harriet Elgiva Howe in 1854 as described in a tour article of the place they were married[2] and had six children, two of whom were railroad men.

He worked on various railroads in the East. He died in Jefferson City, Missouri in 1903[3][1]

Some research is needed as to how he acquired the title of Colonel.

ask our community of genealogists a question.
Sponsored Search by Ancestry.com
DNA Connections
It may be possible to confirm family relationships with Hiram by comparing test results with other carriers of his ancestors' Y-chromosome or mitochondrial DNA. However, there are no known yDNA or mtDNA test-takers in his direct paternal or maternal line. It is likely that these autosomal DNA test-takers will share DNA with Hiram: 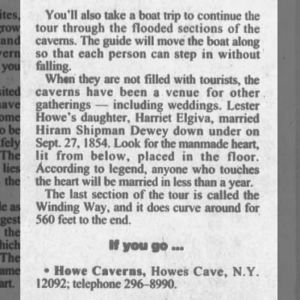 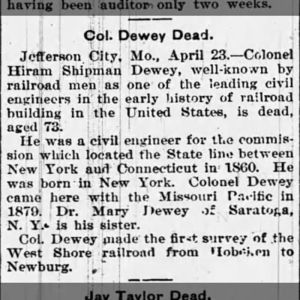 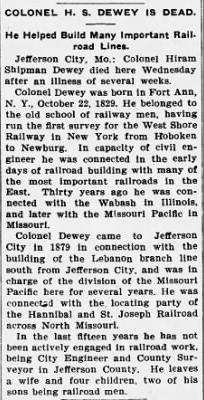 Hiram is 20 degrees from Mary McCauley, 23 degrees from B. W. J. Molier and 16 degrees from Henry VIII of England on our single family tree. Login to find your connection.