Captain John A. Dewey, was born in Dawson County Montana, to John and Nellie (Hobkirk) Dewey. He was in the US Army Air Corps, where he was the Lead Navigator on a B-17 Flying Fortress named The Lulu Belle, and unfortunately, that is where he met his heroic demise. On August 17, 1943, the Lulu Belle flew in a shuttle mission to Regensburg, Germany, where according to the Pilot, 1st Lt. Vince Masters, "We had the hell shot out of us." and he reported that both of his waist gunners and tail gunner had been wounded. They landed their wounded plane in North Africa, where the army base was supposed to be, but arrived to find next to nothing. They replaced their shot engines with "cannibalized engines" and on August 24, they attempted to fly back to Great Ashfield, and sustained further damage flying over Bordeaux while attacking submarine pens. They laid the Lulu Belle down in the Atlantic Ocean 40 miles from the coast of Padstow, Cornwall. Bill Arms, the Ball-Turret Gunner, was the first out of the wrecked plane, and he halfway inflated the sinking raft with a hand pump, an act that saved his life as well as the other survivors. Gunners Edward Sanders and Archie M. Cameron were washed overboard and clung to some seat cushions but were washed away and couldn't get to the raft. At some point, Capt. John A. Dewey and Lt. Lee V. Jones were washed away, when they lost their grip, because they were hanging on to the side of the raft, as there was no room for them inside. The rest of the crew were in the water over 24 hours, before being rescued, and returned to duty.

John's body was never recovered, but his family has a plot for him at the cemetery in his hometown. His name is also listed on the Tablets of the Missing, a WWII memorial in Cambridgeshire, England.

The three men that lost their lives that day with John were;

The seven survivors of the Lulu Belle who were returned to duty were;

The Lulu Belle was a part of the 385th Bomb Group, as well as the 551st Bomb Squadron.

The 385th Bomb Group, who took the nickname "Van's Valiants" after their first Commanding Officer Brigadier General Elliot Vandevanter, flew B-17s from Great Ashfield, Suffolk. The Group led the famous attack on the Focke-Wolfe aircraft factory at Marienburg on 9 October 1943, during which only two out of one hundred B-17s were lost and all of the buildings on the site were damaged or destroyed. They won two Distinguished Unit Citations. The first, awarded to all 4th Bomb Wing Groups, was for accurately dropping their pay load on an aircraft factory at Regensburg, on 17 August 1943 and the Group's second was awarded after leading a difficult long-range mission to destroy an aircraft repair works at Zwickau, south-west Germany, on 12 May 1944. 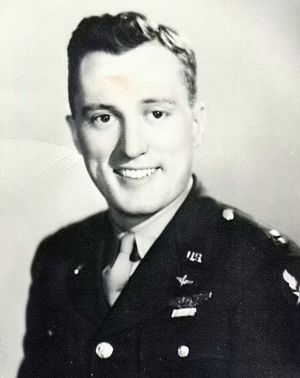 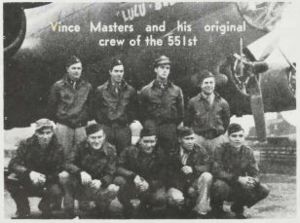