"Thomas Dewey, the representative of the second generation in direct line to our subject, was born in Windsor, Connecticut, December 16, 1640, and died April 27, 1690, at the age of fifty years. He was a miller and farmer in Little River district, and resided at Windsor, Connecticut, as late as January 8, 1660. As he had there paid six shillings he was seated in the long seats in the meeting-house. According to the old records he removed to Northampton, Massachusetts where, on the 12th of November, 1662, he was granted a home lot of four acres upon the condition that he make improvements upon it within a year. He was also granted another tract of twelve acres in the same place, and at his new home he engaged in the milling business. In August, 1666, he removed to Waranock, then a part of Springfield, where he was a landholder and one of the leading citizens. He was instrumental in building a dam and mill at that place and took an active part in public affairs. He served as a cornet in a New Hampshire troop, was a representative to Boston in 1677-9 and a selectman from 1677 to 1686. He was also licensed by the court to keep a public house or hotel. At Dorchester, Massachusetts, he married Constance Hawes, daughter of Richard and Ann Hawes, who came to Massachusetts in the ship Freelove, under command of Captain Gibbs, in 1635. The children of Thomas and Ann (Hawes) Dewey were: Thomas E., born at Northampton, Massachusetts, March 26, 1664; Adijah, born at Northampton, March 5, 1666; Mary, born at Northampton, January 28, 1668; Samuel, born June 25, 1670, in Westfield, Massachusetts; Hannah, born in Westfield, February 21, 1672; Elizabeth, born in Westfield, January 16, 1676, and died February 27, 1682; James, born in Westfield, July 3, 1678; Abigail, born in Westfield, February 14, 1681; James, born November 12, 1683, and died May 5, 1686; and Israel, born in Westfield, July 9, 1686." 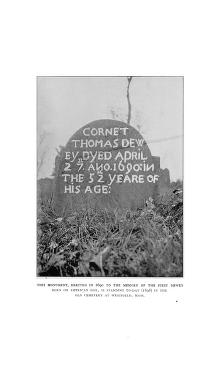 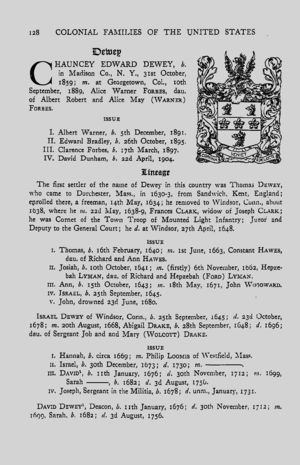 Thomas is 15 degrees from Alicia Taylor, 10 degrees from Henry VIII of England and 23 degrees from Rembrandt van Rijn on our single family tree. Login to find your connection.