Therefore he has been detached from Thomas Dewey.

Researcher Terry Dewey of Dorset England, reported (via email to Smith-32867 16:52, 26 February 2015 (EST) ) finding an old sea chart that showed that the town now known as Swanage in Dorset was known as Sandwich in the 1600s. Terry claims to have found parish records that leads him/her to conclude that:

He was born by 1613 based on freemanship (and consistent with date of marriage).

He emigrated in 1633, settling in Dorchester, removing to Windsor, Connecticut in 1635.

Anderson says that he may have arrived on the unnamed ship from Weymouth, Dorsetshire, that landed in New England in July 1633.

He married in Windsor 22 March 1638/9 Frances (____) Clark. She was a widow, but the first name of her husband is unknown. She married as her third husband in Windsor 2 Nov 1648 George Phelps, and had three children by him.

"Many secondary sources identify Thomas Dewey's wife as the widow of Joseph Clark of Windsor, but Clarence Almon Torrey demolished this claim in 1928, and demonstrated that the identity of the first husband of Frances (___) (Clark) (Dewey) Phelps remains unknown."[3]

He was jury member for the Particular Court of Connecticut beginning in 1642Trumbull, J. Hammond. (transcriber). The Public Records of the Colony of Connecticut Prior to the Union with New Haven Colony May 1665. Hartford: Brown and Parsons, 1850. AKA Colonial Records of Connecticut. Volume I. 1636-1665 p. 81 Google Books and serving several more times in the following years.[1] Most sources say he was cornet of the troop, but Anderson says evidence for this has not been found.[1]

He died in Windsor 27 Apr 1648. Although he was surely buried in Windsor, there is a stone for him in the Old Burying Ground in Westfield, placed most likely by Jason Dewey in the 1830's.[4]

He left no will, but the inventory of his estate was taken 19 May 1648. Distribution was made on 17 Oct 1648 to his widow, his eldest son named Thomas Dewey and to the other five children who were listed as 4 boys, 2 girls (and named with ages; see below).

From the distribution of his estate in 1648: 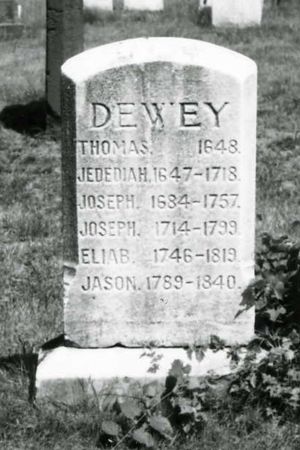 Thomas is 23 degrees from Ludwig Kraayenbrink, 11 degrees from Henry VIII of England and 24 degrees from Ferdinand von Zeppelin on our single family tree. Login to find your connection.