Donato di Niccolò di Betto Bardi aka Donatello was one of the great painters and sculptors of the Renaissance. Like Leonardo Da Vinci, Michelangelo Buonarott and Raphael he ushered in a new age for Italy and consequently all of Europe as their art would become highly regarded.

Donatello was born around 1386 near what is now Florence, Italy. He was the son of Niccolò di Betto Bardi who was a member of the Florentine "Arte della Lana" or "Wool Guild". From an early age, he obtained his artistic skill by working in goldsmith shop and in the studio of Lorenzo Ghiberti.

He later gained fame by undertaking study and excavations with a man named Filippo Brunelleschi. The two became known as treasure seekers and together worked on various projects around Rome from the Pantheon dome to other projects around the city.

On his own, he did major commissions for Florence which included priceless works of art such as:

On December 13th, 1466 he passed away. However, his legacy lived on as he was one of the early fathers of the Renaissance. His sculpting technique would serve to inspire other artists of the period since Michelangelo himself would also create a larger statue of David many years later.

Is Donatello your ancestor? Please don't go away!

ask our community of genealogists a question.
Sponsored Search by Ancestry.com
DNA
No known carriers of Donatello's ancestors' DNA have taken a DNA test. 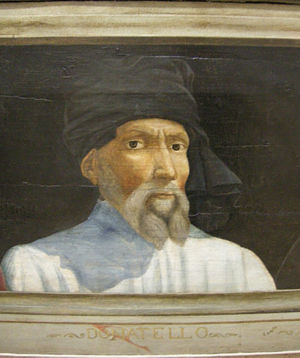 Bob Fields
This profile should be Open and birth-death 1386-1466 should be entered from http://en.wikipedia.org/wiki/Donatello. Featured in 'Today in History' for December 13.
posted Dec 13, 2014 by Bob Fields