Charles Dickens was an English author best known for his stories of life in Victorian England, and especially during the holidays for his classic, A Christmas Carol.[1]

Charles John Huffam Dickens was born on 7 February 1812, at 1 Mile End Terrace (now 393 Commercial Road), Landport in Portsea Island (Portsmouth), Hampshire, England, the second of eight children of John Dickens and Elizabeth (née Barrow) Dickens.[1][2] He was christened 4 March 1812 at Saint Marys, Portsea, Hampshire, England.[2][3] The registrar misspelled his middle name, entering "Huffham".[2][1] John Dickens was a clerk in a Royal Navy pay office.[1] Charles' mother, Elizabeth, was a housekeeper at Crewe, and known for her storytelling abilities.[1] In September 1814, when Charles was two, his youngest brother, Alfred, died and his father was transferred to London, a move that would have important consequences for his son, taking him from a provincial life to the 19th Century's leading world capital and a rapidly-industrializing city.[4]

Charles was a small, sickly child.[1] He passed his time reading and watching other children play.[1] He read through his father's book collection, especially liking the writing of Tobias Smollett (1721-1771).[1] His cousin took him to the theatre, which enthralled the young lad.[1] Though his father earned a decent wage, he was careless with his money, and the family suffered, living "hand-to-mouth" in genteel poverty for much of Charles' childhood.[1] He was, nonetheless, an affectionate father and was delighted with his son's budding talents.[1] Dickens left school to work labeling jars of shoe polish at Hungerford Stairs, a London factory complex, after his father was thrown into debtors' prison, a scene recalled in Charles' Little Dorrit.[1][4] Though he had little formal education, his early impoverishment drove him to succeed. His youth experiences greatly influenced the characters, scenes, and stories he would go on to write.[1]

After three months in debtor's prison (Feb-May 1824), John Dickens received a small inheritance, paid off his creditors and returned home. He secured a writing job as well as a small pension, which set the family back at ease for a while.[1][4] Charles was in better health by this time and was able to attend the Wellington House Academy for two years, being remembered as a handsome young man, forever writing stories and skits, as well as playing harmless practical jokes.[1] Despite all this, he did not stand out amongst his peers while in school.[1]

In May 1827, when financial difficulties again assailed the Dickens family, Charles went on to work as a law clerk, reading in his off-hours at the British Museum and learning shorthand, much like in David Copperfield.[1] Charles became an expert in the practice, and worked in the courts as well as in the House of Commons.[1] In November 1827 he began writing for the "True Sun" newspaper.[1] His success as a current-affairs reporter led to a job with the "Morning Chronicle" . In December 1833 he published his first piece of creative writing when the short story "A Dinner at Poplar Walk," appeared anonymously in London's "Old Monthly Magazine".[1][4]

On 2 April 1836, after a one-year engagement, and between episodes two and three of The Pickwick Papers, Dickens married Catherine Thomson Hogarth, the daughter of George Hogarth, editor of London's "Morning Chronicle," where Charles worked, and later of the "Evening Chronicle" newspaper.[1]The couple lived in London and had ten children together:[1][4]

1851 was a difficult year for Charles and his family. His father, whom he dearly loved despite the latter's fiscal irresponsibility, passed away as did his and Catherine's nine-month-old daughter, Dora. Catherine broke under the strain, undergoing what would be called a "nervous breakdown" today; compounded by becoming pregnant with the couple's 10th and final child, born in 1852. Charles began work on two of his "darker" novels: Bleak House, and Hard Times in the early 1850s. Both works, drawing on Dickens' keen observations of city life in industrial Britain and his family's own experiences with poverty, revealed unpleasant truths about mid-19th Century English life, especially for less-fortunate elements of contemporary society.

In 1857, Charles Dickens met actress Ellen "Nelly" Ternan, while producing a London play. They began a romantic relationship that lasted the rest of his life.[5] The following year, which was by all accounts filled with stormy marital episodes, he and Catherine agreed on an amicable separation with no divorce; he continued to support her financially. She agreed to move out of their home on London's Tavistock Place, leaving her spinster sister, Georgina Hogarth, there as housekeeper. Georgina had sided with her brother-in-law, feeling that Catherine's behavior was the major cause behind the break-up. All but one of their still-minor children chose to remain in their home with their father and their maiden aunt. Only their oldest son, "Charley," b: 1837, chose to live with his mother. [5] Charles Dickens was known to be an enthusiastic and doting father.[1][4]

Charles Dickens edited a weekly journal for 20 years, wrote 15 novels plus hundreds of short stories and non-fiction articles, lectured and performed extensively. He was an indefatigable letter writer, and campaigned vigorously for children's rights, education, and other social reforms.[1]

Charles' first major success was his "Pickwick Papers", which put him at the top of his local publishers' lists, from April 1836 to November 1837.[1] "Oliver Twist" followed from January 1837 to March 1839.[1] After that came "Nicholas Nickelby" and a series of essays.[1] Charles' style was soon set: vivid descriptions of children suffering in the dredges of Victorian industrial society, often dying, while commenting on the dreariness he observed both in his younger years and in day-to-day in contemporary London.[1]

The strain of article deadlines started to weigh on him, and he took ill in 1841.[1] He was also dealing with grief from deaths in his family, so he and Catherine decided to set sail for the United States.[1] He spent a month in Canada, on the trip, as well.[1] He was an active campaigner against slavery, and the trip, although he was lauded with admiration by American fans, was disturbing, seeing the continuing abuse of both slaves and the urban poor in the United States at that time.[1]

In 1842, when Charles and his wife Catherine (Hogarth) Dickens sailed to America, her younger sister, Georgina "Georgy" Hogarth, joined his and Catherine's London household at Tavistock Place. She took care of the children during their parents' travels, becoming their live-in housekeeper aunt. Georgy Hogarth never married, devoting her life to her sister, her famous brother-in-law and their children. Charles Dickens later rewarded her by making her his literary legatee, with a handsome inheritance. Georgina Hogarth and Charles' oldest daughter, Mary "Marnie" Dickens, edited three volumes of Dickens' public correspondence posthumously, carefully deleting any "private" references or thorny personal discussions.[1][5] He also spent a lot of his time in philanthropic endeavors, especially regarding the education and upbringing of young people, whom he considered to be the future.[1]

"A Christmas Carol" and a few more tomes like it, appeared in 1843, and were well received.[1] Disappointed by the money they brought in, despite their popularity, Charles ventured to Italy for a holiday to refresh in 1844. His son, Francis Dickens, was born in Genoa during this extended trip abroad.[1] Upon returning to London in 1845, he decided to try his hand at the theatre, both writing and acting in performances.[1] Buoyed by his successes, he next attempted the role of newspaper editor, but failed in his attempts at leading the "Daily News," resigning after only a month on the job.[1] Again he was on the move, this time traveling to Switzerland to focus on writing another novel.[1]

Charles enjoyed the Swiss people, and found his time spent working on the novel he wrote there, "Dombey and Son," enjoyable.[1] His next stop was Paris, where he stayed three months before returning home to London.[1] After his Swiss and Parisian adventure, Dickens took to the theatre again, acting and writing, especially working with Leigh Hunt in Shakespearean endeavours.[1]

In May 1849, he serialized "David Copperfield", his most autobiographical novel.[1] Following the success of the book, originally published as a series of succeeding chapters in the penny press, Dickens began his own journal, in which he would publish all his future writing, and to which he'd devote the bulk of his energies until his death.[1] In the early 1850s (see above), he'd lose his older sister and his father, as well as an infant daughter, and some of his darker novels, "Bleak House" and "Hard Times" would be written.[1] Soon after came "Little Dorrit".[1]

In 1856 Dickens bought Gad's Hill Place, Hingham, in Kent.[1] A provincial retreat, far from the hustle and bustle but also the unsavory slums of London, this had been a boyhood dream (he had visited the house in 1821 with his father), and he spent the rest of his life improving it, as well as living there. It is owned by the Dickens Fellowship today.[1][6] Always interested in theatre, it was around this time that he discovered he could raise quite a lot of money, whether for himself or the many charitable causes he supported, by giving public readings of his writings. Thus began one of his major occupations until the end of his life.[1]

"Great Expectations" was completed in 1861, on the heels of "Tale of Two Cities". Both were critical and public successes.[1] 1863 marked the death of both his mother, and his son Walter, a soldier in the British Raj at Calcutta, Bengal, India.[1] After pushing himself too hard, he fell severely ill in 1865, resulting in a foot ailment (akin to neuropathy) that stumped contemporary doctors.[1]

On June 9, 1865, he was involved in an awful accident on the railway at Staplehurst, in Kent.[1] Despite the stress the incident caused, he pushed himself to keep writing and giving public readings.[1] Despite illness and the pain in his foot, Dickens accepted an invitation to visit the United States again, landing in Boston in November 1867.[1] The trip, though monetarily profitable, was a terrible strain on his health.[1] By early 1869, it was all too much, and on the verge of paralyzing his left side, he was forced to stop his public readings.[1] Even so, it wasn't much later that he talked his colleagues into 12 more readings, but without any rail travel, in hopes they wouldn't be such a strain on his body.[1] His final year was spent at Gad's Hill Place, Higham, Kent, occasionally giving readings nearby.[1]

On June 8, 1870, Dickens suffered a second stroke at his home in Gad's Hill Place, Higham, Kent.[1] He never regained consciousness, and the next day, June 9, five years to the day after the Staplehurst rail crash, he died at Gad's Hill Place.[3][7][8] He was laid to rest in the Poets' Corner of Westminster Abbey, London.[3] 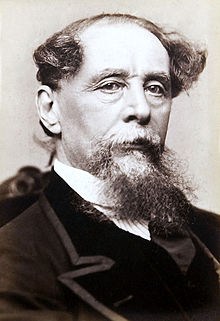 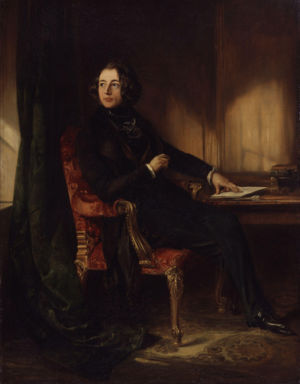 Dickens at his desk, by George Herbert Watkins 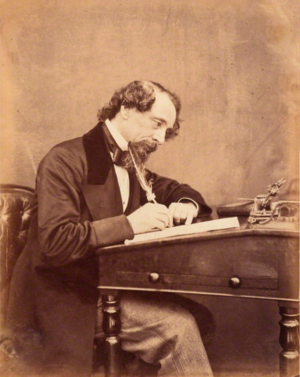 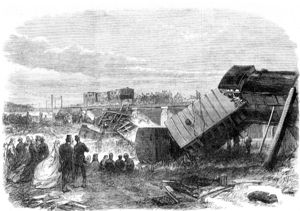 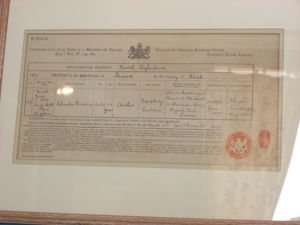 Andrew Simpier
Was his nickname “Boz”?

If so can it be added as his nickname ?

Is there a story behind the name “Boz”?