Thomas Dinzey (whose people came from England by way of Barbados and St. Kitts to Saba) was Vice-Commander of Saba from 1778 to 1801, Commander from 1801-1803 and Vice-Governor from 1803-1809 during Dutch rule (Netherland Antilles) and occupation by British and French.

"Recently when doing research on their great grandfather Capt. Charles Barnes of Saba who moved to St. Barth’s, a box of old documents relating to the Dinzey family was found. The last Dinzey on St. Barth’s Julia willed her house to Capt. Barnes who had befriended her in her last years. Her father Sir Richard Dinzey Dinzey-3 son of Governor Thomas Dinzey of Saba played along with other Sabans a prominent role on St. Barth’s during the time that the island belonged to Sweden. The Sabans there were the largest slave owners on that island it turns out in documents which I recently had access to via Raymond Simmons. I will come back in detail on more of the history of the Dinzey’s even though I have carried in the past an article in my column “Under The Sea Grape Tree.” This small document was among the Dinzey papers which I am going through via Mr. Montoya who is married to one of Capt. Barnes’s great granddaughters. The document reads as follows: ” We the undersigned Burgers and Inhabitants of the island of St. Eustatius hereby certify and declare that this island was taken in possession by his Britannic Majesty’s forces in the month of April 1801 and held by them until the month of November 1802 when in consequence of the treaty of peace ratified at Amiens it was restored to the Dutch government. Thus certified and declared at St. Eustatius this 29th October 1850.” signed: Sarah Waag, A.S. Mussenden, G.C. Lespier This document does not say so but the British reoccupied St. Eustatius later on and kept it until 1816 after which the island remained permanently Dutch."

"The most important families of European descent before 1863 were Simmons, Leverock, Bail or Beal, Wood, Dinzey, and names with a Dutch origin were van Beverhoudt, Cuvelje (French Hugenot), Graval, Moises Correa (of Jewish Origin on population list of 1715) Many of these families had moved on to the Virgin Island back then. After the Great hurriane of 1772 the petition signed for relief to the Dutch West India Company was for 90% the traidtional English names, like Hassell, Johnson, Cox, Keeve, Leverock, Simmons, Carter, Peterson, BeaksBaker, Mardenboorough, Halley, Every. Keeve, Kelly, Haddocks, Wood, Winfield etc. By then the island was settled and private land ownership covered nearly all of the island with the only possible government claimed land was a smal portion of the top of the Mountain."

Our Lt. Governor backed up his letter with signatures of the most prominent white men on the island. Saba was still in a state of slavery at the time and only men could sign. The Woods family being the exception as they had bought their freedom from the Thomas Dinzey heirs in the early eighteen hundred’s."

"On August 5th, 1779 Governor Thomas Dinzey of Saba in a letter to His Excellency General Clausen of St. Croix concerning runaway slaves refers to the reverend Hugh Knox as attorney to himself and Isaac Simmons, so that the reverend remained in contact with Saba even after he had moved to St. Croix." 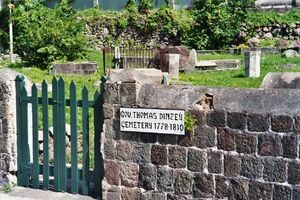 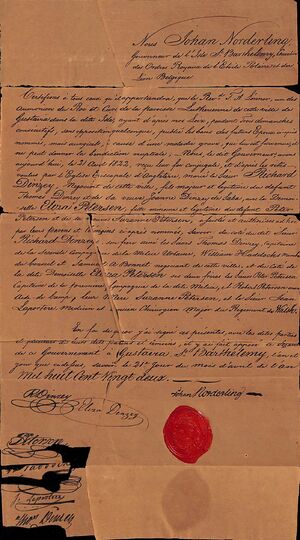 Patricia Roche
Dinzey-18 and Dinzey-4 appear to represent the same person because: same name, dates and family
posted Jul 30, 2016 by Patricia Roche
Jennifer Dinzey
Thomas Dinzey (whose people came from England by way of Barbados and St. Kitts to Saba) was Vice-Commander of Saba from 1778-1801, Commander from 1801-1803 and Vice-Governor from 1803-1809 during Dutch rule and occupation by British and French.

Thomas Dinzey (whose people came from England by way of Barbados and St. Kitts to Saba)