Joseph was a Friend (Quaker)

Joseph Dixon was born October 2, 1719 in Mill Creek, New Castle County, Delaware[1]. He was the son of Henry Dixon and Ruth Jones Dixon.

Like his parents, he was a Quaker, and church records from the New Garden Monthly Meeting (just a few miles west of Mill Creek across the state line) record that on November 25, 1742 (9th month, 25th day, 1742) he was married to Mary Pusey[2]. Joseph and Mary (they must've been teased about that...) remained in the New Garden area for a number of years. Futhey and Cope’s 1881 “History of Chester County Pennsylvania” shows Joseph on a 1753 tax list from New Garden Township in Chester County, just over the line from New Castle County[3].

In 1764 Joseph and Mary moved with their family to North Carolina. Records of the New Garden Monthly Meeting show that on June 12, 1764 Joseph and his wife Mary, together with their children Solomon, Jesse, Eli, Nathan, Stephen and Samuel received a certificate from the church to move their membership to the Cane Creek Monthly Meeting in North Carolina. This was located in what was then Orange County, but now comprises a part of Chatham County. In this move they became part of a large migration to the area taking place during this general time period. “Carolina Quakers” by Hinshaw (1972) states that the primary reason for the tremendous migration to the south was the abundance of cheap land. For the price of one acre of land in southeastern Pennsylvania, several acres could be bought in central North Carolina. Likewise the climate there was milder and growing season longer than in Pennsylvania. They were received into the Cane Creek MM on 3 November 1754[4].

By the time of Joseph’s arrival in North Carolina, other Dixon relatives of his had already settled in the area. The first to have done so was Simon Dixon, was born in Pennsylvania in 1728. His father was Thomas Dixon, a son of the immigrant William, and a cousin of Joseph. Simon settled at Snow Camp, in what is now Alamance County North Carolina, adjacent to Chatham County, in 1751. A fair amount is known of these early Dixon settlers from the research of Benjamin Franklin Dixon (1892-1970) as contained in his unpublished manuscript “The Old Stamping Grounds – Some Notes on the Quaker Dixons of Chatham County N.C.” He was one of the pioneer researchers on the Dixon family. After Simon’s arrival in North Carolina, he bought land from the Lords Proprietors of the colony in 1751 and built a mill upon it in 1753. The mill continued in use into this century. When the Pioneer Association in the area erected a monument to Simon’s memory in the year 1929 in the old Cane Creek cemetery, a millstone with which Simon had once ground corn was used as a marker for his grave.

Simon first arrived at Cane Creek in the spring of 1749, at which time he cleared some land in Orange County, built a pioneer cabin, and planted a crop of corn. Discouraged however by the primitive surrounding, with his nearest neighbor six miles away, he returned to Pennsylvania. In 1751 he returned to Cane Creek, bringing with him a group of settlers. In 1753 they obtained their certificates or removal from the Newark Monthly Meeting, and became members of the Cane Creek Monthly Meeting. After our ancestor Joseph Dixon followed Simon’s lead into North Carolina, B.F. Dixon records that he became a great land trader, who public records show to have been constantly buying and selling tracts of land. His home was on “tick ridge” three miles south of the present day Silver City. In his will he referred to the original tract of land of 680 acres granted him on December 16, 1762[5].

Joseph Dixon died in Chatham County in 1770. His will is attached as an image and is transcribed below[5]. He was buried in Napton Cemetery[6].

In the Name of God Amen I Joseph Dixson of Orange County in the Province of North Carolina being Weak in Body but perfect in Senses Praised be God do make this my Law Will and Testament. Imprimis I leave to my loving Wife Mary Dixson the South End of this Tract I live upon including Buildings all the Improvements Beginning for the South Part or First Part at the Corner Post Oak the beginning Tree of the Original Tract of Land Granted to Joseph Dixson on the 16th Day of December 1762 for Six Hundred & Eighty Acres Running thence North 170 Poles to Four Hickorys thence West 320 Poles to a Marked Post Oak on the Original Line thence South 170 Poles thence East to the beginning Containing 340 Acres of land during her lifetime or Widowhood and after that it shall be Equally Divided between my two Sons Nathan & Stephen Dixson to them and their heirs forever. - - - - Item I leave to my Daughter Anne Bailey Wife of Caleb Bailey five Pounds Pensylvania Money to her and her Heirs forever. - - - - Item I leave to my Son Solomon Dixson a Tract of Land Lying on Tyrds Creek the Waters of Haw River Joining John Lambrals Land also Liberty for to sow a Field on the old Place before he Settles to him & his Heirs forever. Item I leave my Son Jesse Dixson the Piece of Land I bought of John May an also the Piece of Land I bought of David Brown ajoining both of them to him and his Heirs forever. - - - Item I leave my son EliDixson the North End of the Tract I now live on beginning for the North part of Four Hickorys the N.E. Corner of the first Part Running thence North 58 Poles to George Dixsons Corner B.O. thence N.E. Easterly along his Line 49 Poles into a Piece of Land Bought of Joh May to b Marked W.O. thence N.W. 58 Poles to a marked W.O. on the Original Line thence North to the N.E. Corner of the Original Tract of 680 Acres thence West 320 Poles to a W.O. thence South 160 Poles to a marked Post Oak thence to the First Beginning Containing 340 acres to him and his Heirs forever. It is my Will that my Son Jesse Dixson give him a years Rent when he begins to Settle on his Place. Item I leave my Sons Samuel Dixson and Joseph Dixson Each of them Eighty Pounds or that much laid out to secure land for them the first Convenient Opportunity to them and their Heirs forever. - - - Item I leave the Rest of my Estate Goods & Chattels after Payments of my Just Debts to the Disposal of my Loving Wife and it is my Will that my Sons shall enter in full Possession of the Land when they arrive at the full age of Twenty one years and it is my Will that if any of my Sons Dieth without Issue Lawfully Begotten that then his Portion of Land and other Effects shall be Equally between them ______ Part of my Children. I do Constitute my Trusty and Loving Wife my Sole Executrix of this my Last Will & Testament. In Witness whereof to all and every Part of the above said Will and Testament I have hereunto set my hand and Seal this 5th Day of the 12th Month 1769. Sealed Published and declared by the above Named Joseph Dixson as his Last Will and Testament in the Presence of us.

(Seal)
William Moffitt
Joab Brooks
Solomon Cox (Affirmd)
(Orange County April Court 1770)
The within Will was Exhibited in open Court and Proved by the Oath of Joab Brooks one of the subscribing Witnesses thereto and Ordered to be Recorded.

ask our community of genealogists a question.
Sponsored Search by Ancestry.com
DNA Connections
It may be possible to confirm family relationships with Joseph by comparing test results with other carriers of his Y-chromosome or his mother's mitochondrial DNA. Y-chromosome DNA test-takers in his direct paternal line on WikiTree: It is likely that these autosomal DNA test-takers will share some percentage of DNA with Joseph:

Images: 3
Will of Joseph Dixon 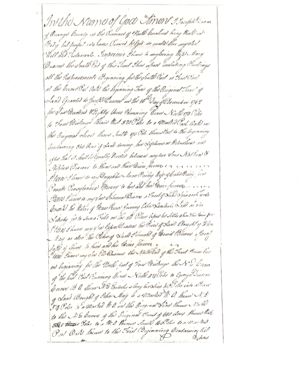 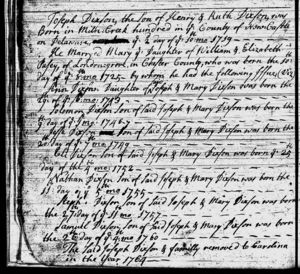 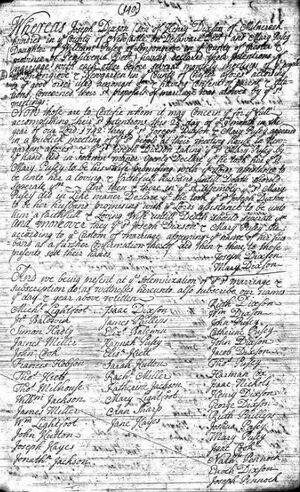