John Dixon was born in Ireland, and later came to America, settling in Conn. [2]

Their daughter, Mary (Dixon) Kies, became the first woman in America to apply and receive a US patent. 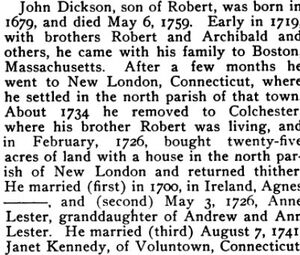 Scott Michal
I added a source connecting John as the child of Robert and Priscilla. I am not completely convinced, but it probably is worth looking into.
posted Oct 29, 2022 by Scott Michal

Irene (Dowd) Marlborough
This man can't be the father of William Dixon baptised at Hart, County Durham, England in 1686. He would have been too young. What is the evidence that he is the John Dixon who married Jane Peake at Middleton in Teesdale in 1673? He was not born until 1679 according to this profile. Must be a different John Dixon and this man needs to be separated from Jane Peake and William Dixon. Jane and William probably don't belong together either.
posted on Dixon-10662 (merged) Feb 18, 2022 by Irene (Dowd) Marlborough