He married his first wife Marguerite Thibodeau, daughter of Alexandre Thibodeau and Françoise Benoit, on 12 September 1743 at L'Assomption de Pisiguit.[1][2]

The 1740s were a period of instability in the British colony of Nova Scotia. Many Acadians sought refuge in the French colony of Isle Saint-Jean.

"Alexis Doiron, his wife Marguerite, their children, and other members of their extended family were part of this group. In 1750, they settled in Grande Anse (now Orwell Bay) on the south shore of modern day Prince Edward Island. It was the first of many displacements that the Doiron family would experience over the next 30 years." [4]

Marguerite passed away not long after settling on Isle Saint-Jean since in the census of 1752 at Grande-Anse, Alexis was listed as a widower, 29 years of age. Besides himself and his three sons age 3 to 8 years, the house included his mother Marguerite Barrieau.[5]

At the end of November 1758, Alexis and his family were deported to France along with thousands of Acadians who lived in Isle Saint-Jean. Their two young children Marie Blanche age 5 and Joseph Marie age 3 died during the crossing. A few months later Théodore and 4-month-old François-Xavier, probably born during the crossing, died at the hospital in France.[6]

They lived for a while at Saint-Servan near Saint-Malo, then moved to Saint-Énogat and later on lived at Belle-Ile-en-Mer.[4] After having lived 13 years in France, the family decided to return to Isle Saint-Jean and in 1772 settled in Township 59.[4] Before 1782, he moved his family to Rustico.

Alexis was mentioned for the last time in a document in the 1798 census at Rustico.[7]

Note that one source -- Robichaux's material from the Belle-Île Declarations (pp. 266-267) -- claims that Alexis Doiron had an additional wife, Hélène Blanchard, in the 1750s between Marguerite Thibodeau and Madeleine-Josèphe Bourg . That source identifies Hélène Blanchard as the mother of only two children, the 4th and 5th offspring of Alexis: Marie-Blanche and Joseph-Marie, both of whom died during the crossing to France, in the Expulsion, between late November 1758 and late January 1759. All other sources seem to exclude her.

Is Alexis your ancestor? Please don't go away! 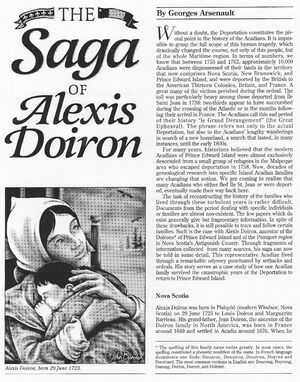 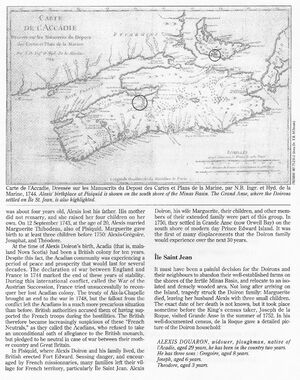 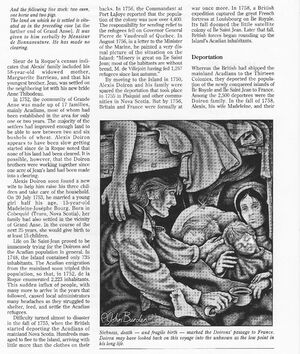 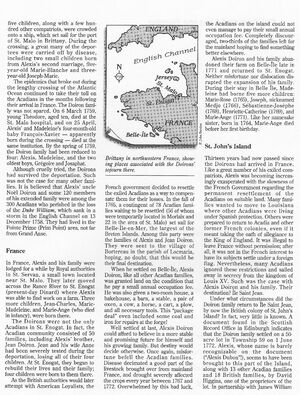 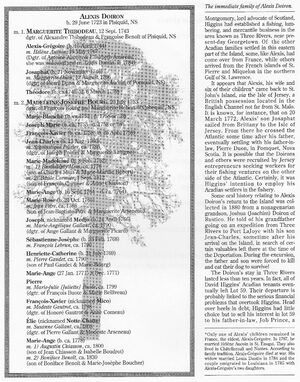 Leave a message for others who see this profile.
There are no comments yet.
Login to post a comment.
Ryan Doiron
He is my fifth great grandfather
posted Apr 02, 2021 by Ryan Doiron