The authorization for Sarah Dole and Andrew Griscom to marry was recorded 2/7/1685 by the Philadelphia Monthly Meeting.[1]

Sarah Dole is recognized by the Welcome Society and is an Ancestor Approved for Membership.

John Kaighn married second Sarah Dole (widow of Andrew Griscom) with whom he had two sons. Sarah was an immigrant from Wales; her brother John Dole was also of Newton Township.[2]

According to the draft of a letter by Kaighn quoted by Clement, by 1702 he was again a widower, having

"lost two good and loving wives, in a few years time--and left alone with young babes;" that these were two boys and one girl, "the youngest yet at nurse".[4]

Images: 1
Genealogical and memorial history of the state of New Jersey : a book of the achievements of her people 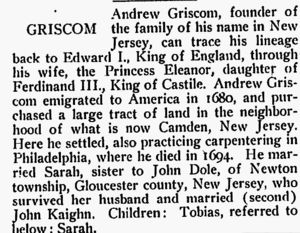