Bob Dole was awarded the Bronze Star with "V" device.

He was born on 22 Jul 1923 in Russell, Kansas, USA and his parents were Bina Marie Talbott and Doran Ray Dole.

He was a star high school athlete at Russell High School where he graduated in 1941.

During World War II he served with distinction in the United States Army. In April 1945, as a 2nd Lieutenant in the 10th Mountain Division, while engaged in combat near Castel d'Aiano in Italy, he was struck by shell fragments in the back and arm. His spine partially shattered, his wounds were presumed to be mortal. Nevertheless, he survived and through multiple surgeries he was able to recover, but never recovered full use of his right arm. He was discharged as a Captain in 1947 for medical reasons.

He was an attorney and American politician.

From 1961 to 1969 he served in the United States House of Representatives.

He was the vice presidential nominee in the 1976 election (running mate to Gerald Ford in his unsuccessful re-election campaign).

He was also the Republican presidential nominee in the 1996 election.

He died on 05 Dec 2021 in Russell, Kansas, USA. He is buried in the Arlington National Cemetery in Washington, D.C.[1]

His 4th GGFs, Ichabod Daggett and Joseph Mitchell, both fought in the Revolutionary War. His 6th GGF, John Dole, emigrated from Wales.

Is Bob your relative? Please don't go away!

ask our community of genealogists a question.
Sponsored Search by Ancestry.com
DNA
No known carriers of Bob's ancestors' DNA have taken a DNA test. 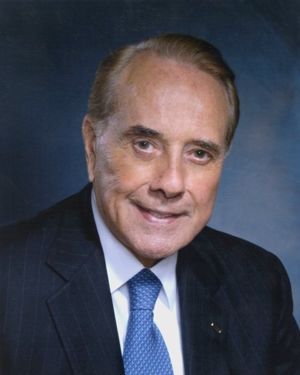 Marilynn (Pomles) Tobash
Why are his wounds and injuries from WW2 not mentioned in his biography? Those wounds and injuries define the rest of his life for him. The people who cared for him in the years after the war ended helped him rise up from the deep depression and make something of himself and his life. He ended up with a partially paralyzed right arm and limited use of his left arm. He taught himself to write with his left hand and spent 3 years recovering and getting his body to the point where he could go on with his life.

I've admired him for years and a few years before he made his presidential run I met him at Walter Reed when I went there to see my neurologist. He was there setting up the care for his prostate surgery and was accompanied by a team of very high ranking officers, doctors and possibly Secret Service men. When I noticed him they tried to get me to go away, but he broke away from them to come over and speak to me and my husband. I didn't know how to greet him so when he offered his left hand I clasped it with both of my hands. He was warm and very friendly and asked us about why we were at Walter Reed. He loved my answer that my husband had been a career soldier with 21 yrs active duty and offered condolences when I told him my father had been killed in WW2. He said I should be very proud of him, and I am.

He was much easier to talk with than any other politician I've ever met and I've been meeting them for over 60 years now. He had more common sense than any politician in congress today, he tried to get things done through bipartisanship and we didn't have the hate there is today between the 2 parties. We need to get that feeling of bipartisanship back in the Capitoland everywhere else in the nation.