William Dorney
Born about 1777 in Ireland

The master version of this biography, which includes images, is maintained at http://dorneyfamilyhistory.net/famtree_web/History_dorney.pdf

William was born around 1777, probably in Clonmel, County Tipperary. The extant parish registers only date back to 1790, so it will be difficult to ever identify his parents. It’s not known roughly when Catherine was born, but she was probably younger than William.

The current Saint Mary’s church replaced the earlier one in 1836. The early church of Saint Mary’s was a small chapel with a thatched roof, an illustration of which can be found in My Clonmel Scrapbook, 1907, by James White.

William and Catherine had two children that have been identified so far, Edward (1803) and Thomas (1810).

William worked as a hairdresser in Clonmel. He was one of the founders of the Clonmel Mechanical Society in 1814 and was involved with that organisation until his death.

William is buried at Rathronan cemetery, situated four kilometres to the north of Clonmel.

William’s headstone reads William Dorney of Clonmel, died February 9th 1835, aged 58 years. This stone is erected by the Clonmel Mechanical Society, of which he had been a member and had acted as secretary for the last 22 years. Morgan Jones (Master).

His hairdressing business was taken over by his son Thomas at his death. 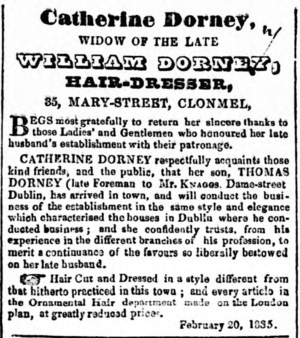