The master version of this biography is maintained at http://www.dorneyfamilyhistory.net/famtree_web/History_dorney.pdf

Paul was born on 29 January 1914 in Ascot Vale, Melbourne. He was the youngest of four children of James Henry Dorney, a hairdresser and tobacconist with a sideline in illegal gambling, and Marie Louise Kiernan, a highly intelligent, educated and formidable woman.

Paul initially attended high school at the Christian Brother's College in East Saint Kilda. The school still exists, but is no longer run by the Christian Brothers. The College was not shy about promoting themselves, and Paul's 1928 results were published, indicating that he had “qualified” English, Latin, French (6th), Algebra, Geometry (4th), Geography, History, Physics, Chemistry and Drawing.

By 1929 however, Paul had changed to Assumption College at Kilmore, which would mean he was a boarding student there. While there Paul sat for and passed examinations for the University of Melbourne (results published April 1930). It would appear that at this time the University managed Year 11 and 12 examinations. The Assumption College was also not shy about self-promotion, and so we know Paul had been studying English, Latin, French, Algebra, Geometry and Trigonometry, Chemistry and Physics.

It appears Paul was was back again at the Christian Brothers' College the next year when he qualified for the school leaving certificate, reported in April 1931.

In March 1937 Paul applied for a billiard licence for four tables at his father's business in Ascot Vale. This would have been because after two stints in jail, his father would no longer have been considered fit to hold a billiard licence. Paul gave his address as Fortuna, a guest house on the esplanade in Elwood, so was no longer living at home.

Paul left Melbourne on 18 December 1937 to take up a position as a resident medical officer at the Mater Hospital in Brisbane. While in Brisbane, he testified in a court case that a witness was not fit to attend court, saying “emotional excitement might bring on an attack from which the witness might die.”

After Brisbane, Paul worked at the Rockhampton General Hospital, his name appearing on a death certificate which was later tendered in court. It was probably in Rockhampton that Paul crossed the path of a conman and thief named Arthur Augustus Hymus.

Arthur impersonated Paul when he visited Charters Towers in March 1939, attending a caesarian birth and autopsy and being mentioned in the social notes in the newspaper. Returning to Melbourne, Paul became the medical officer at the Heatherton Sanatorium. Paul took a new job in Hobart in February 1940. He flew out from Launceston Airport (Western Junction) on 17 April for his wedding in Melbourne the following day.

In August 1940 Paul was became an honorary physician on the executive of the Tasmanian Sanatorium. Paul is also named in a couple of different contexts as a judge at first aid competitions.

Paul enlisted in the Royal Australian Naval Volunteer Reserve as a Surgeon Lieutenant on 9 September 1940.

Paul was then later enlisted into the Royal Australian Navy on 6 August 1942 and was assigned as a ship’s doctor, based in Sydney. He had the rank of Surgeon Lieutenant. Paul did not see action in the war and was discharged with a duodenal ulcer on 19 July 1943. His return to Hobart was mentioned in the newspaper, and the way it was worded suggests that Mollie and his two children may have been living in Sydney while he was stationed there. On their return to Hobart they lived at 33 Montague Street, Lenah Valley. The next month he announced he would resume practice at 73 Federal Street on 1 September.

In September 1944 Paul was one of eleven doctors who sent a letter to the editor raising concerns about the shortage of nursing staff at the Queen Alexandra Hospital.

Paul was instrumental in getting Hobart's milk supplier, Baker's Milk, to pasteurise their milk. His campaign started based on his own personal experience, and started with a letter to the newspaper in December 1944.

Paul and Mollie had been feeding their infant son Peter with humanised milk1, delivered fresh daily by Baker's Milk. Peter had been suffering terribly from diarrhoea, and Paul, after some time had isolated the cause as being due to high e. coli levels in the milk. His letter to the newspaper warned other parents of the danger. There resulted in both positive and negative letters to the editor in return.

The profile he generated was possibly related to some public lectures he gave in mid-1945 on The Health of the Child, speaking at events sponsored by both the Liberal Party and the Workers Educational Association.

Legislation requiring pasteurisation of milk appears to have been passed in April 1947, but some unpasteurised milk was still being sold in 1949.

In 1945 the Duke and Duchess of Gloucester visited Hobart. Paul was listed amongst hundreds of others attending the reception at City Hall.

In April 1946 Paul and his family flew to Melbourne for him to undertake a post-graduate course, expected to take six months, but which extended to nearly twelve months, returning in March 1947. They stayed with his parents-in-law in Frankston. Paul passed his exam to a become Member of the Royal Australasian College of Physicians (MRACP) in October 1946, and would receive his Doctorate of Medicine in April 1947. This qualification made him one of the most qualified doctors in Australia in this era.

Paul had secured a job as company doctor for the Electrolytic Zinc Works, although also working out of his private practice at 73 Federal Street. His arrangement with the Zinc Works ended in September 1947.

Paul inherited the practice and professional rooms at 148 Macquarie Street of Dr James Sprent and moved his practice there a few weeks before Dr Sprent's death in July 1948. Inherited is perhaps the wrong word as Paul paid for the rooms, but at a very good price. It was not without controversy as Dr Sprent had a wife and two sons who contested the sale. The case went to the Supreme Court in July 1949 as it was alleged that Paul's conduct was improper, as he was Dr Sprent's medical adviser at the time the agreement was made. Paul was awarded costs.

In what seems a trifle bizarre note, Paul represented the British Medical Association at an inquiry into new tram routes in Hobart in 1950. The BMA was against the route running down Macquarie Street because it was thought the trams might interefere with electro-cardiograph, amongst other issues. Paul had some trouble articulating the BMAs case as he was a late substitute for the BMA secretary.

Paul was appointed a member of the Doctor's Wages Board in March 1953. On the occasion of the first visit of Queen Elizabeth II to Tasmania in 1954 he was appointed Honorary Physician to the Queen.

The Social Notes in December 1949 sees the first mention of holidaying at Dodge's Ferry; the family bought their shack there in that year. When they holidayed there in January 1952 it was immediately after entertaining 70 guests at a cocktail party at their Sandy Bay home.

In 1950 or 1951 or so the family lived at Dodges Ferrry for six to nine months, after their house at 27 Lipscombe Avenue was sold but the house at 33 Willowdene Avenue wasn’t ready to move into. Mollie drove the kids to school each day in Hobart.

His Willowdene property is now (sometimes at least) referred to as Paul Dorney House. Paul engaged his brother Esmond, an architect, to extensively remodel and extend the house in 1956.

In November 1956 Paul and his family took their new Mercedes on the boat from Devonport to Melbourne to attend the Olympic Games there.

In December 1954 Paul was appointed as deputy president of the Tasmanian Amateur Athletic Association. The available newspaper record finishes at the end of 1954.

Mollie and Paul's honeymoon was delayed for many years because of the war but they eventually travelled to Europe, spending six months away and leaving the children behind in Hobart. This is the kind of trip you would expect to be mentioned in the Social Notes, but no mention has been found, suggesting the holiday took place after 1955.

His trip probably wasn't a complete holiday as it is known that at some point Paul twice travelled overseas for postgraduate study, to the United Kingdom and United States, although the exact dates are not known. Is likely that on one of these trips Paul qualified as a cardiologist.

Paul retired from full-time practice in the late 1960s due to the onset of the degenerative disease, Systemic lupus erythematosus (SLE), sometimes referred to simply as lupus. SLE is is an autoimmune disease in which the body's immune system mistakenly attacks healthy tissue in many parts of the body. Women of childbearing age are affected about nine times more often than men.

Paul however continued to work part time at the Repatratiation Hospital until January 1979.

According to one of his obituaries, Paul was involved with early diagnostic work on two heart diseases = Conn's Tumor and calcific tumor of the inter-auricular septum. The same obituary stated he was a senior physician and later cardiologist at Royal Hobart Hospital and was known for his contributions to medical literature.

His son Peter recalls Paul telling him he had reported a charlatan doctor to the Medical Association in Hobart. Apparently this guy had been getting away with practising medicine for some time until Paul spoke to him at a medical gathering and realised that, despite his seeming medical language, he really couldn’t have qualified.

Amongst his hobbies and interest Paul flew model aeroplanes and took up woodturning.

Paul and Mollie had moved from Willowdene Avenue to 3 Mawhera Avenue, but still staying in Sandy Bay.

Is Paul your relative? Please don't go away!

ask our community of genealogists a question.
Sponsored Search by Ancestry.com
DNA Connections
It may be possible to confirm family relationships with Paul by comparing test results with other carriers of his Y-chromosome or his mother's mitochondrial DNA. Y-chromosome DNA test-takers in his direct paternal line on WikiTree: It is likely that these autosomal DNA test-takers will share some percentage of DNA with Paul: 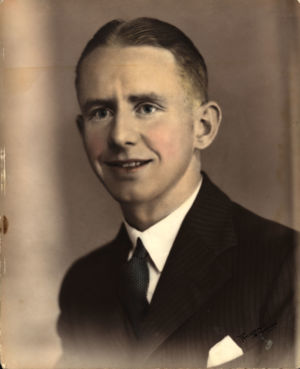 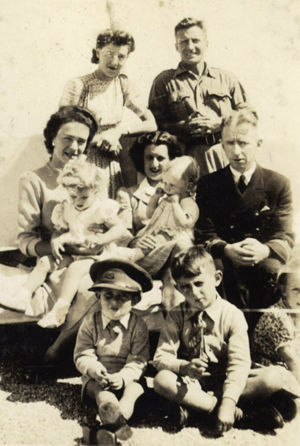