Patrick left Ireland circa 1827 from Ireland for Prince Edward Island where he is reported to be the first Irishmen in Lot 44. He purchased 70 acres in Lot 44 in 1828 and married an Acadian woman Lissette Chaisson/Chiasson by 1830 <https://www.familysearch.org/search/film/008126397?cat=506382> and the records for the birth of their children have been quite difficult to locate.

Patrick is named as the father of Andrew Doyle in Andrew's Catholic Church marriage record. His birth location in Ireland comes from Andrew's Death Certificate where it is clearly identified as Thomastown.

The first children born to this couple births were registered at the Saint Columbia Catholic Church Lakeville in Lot 47, though I have only located two registrations for this couple's children. The other children have been added based on other primary source documentation though there may be more. Daniel has recently (June 2018) been confirmed with DNA to be the brother of Andrew.

Reviewing historical records for PEI, Patrick appears in the 1841 Census for Lot 44 in Kings County and is the only Doyle in the area. This is supported by the Leard Papers where George Artemas Leard states that Patrick is the first non-Acadian to inhabit this region.

From this document, one can surmise that he was a farmer of 70 acres, and there were 4 young boys under 16 (John [5], Fidele [4], and 2 unknown males [Andrew nor Richard were born yet]), in the household along with his wife (Elizabeth/Lissette) and one daughter (Mary Ann [2]) under the age of 16, equalling a total of 7 individuals. They all are listed as Roman Catholics and the farm produced 18 bushels of wheat, 100 bushels of oats, 20 bushels of barley, and 600 bushels of potatoes. Additionally, the family had one horse, 9 sheep, 3 neat cattle, and 4 hogs. Most importantly this document states that Patrick is from Ireland and he paid his own passage to PEI and the other six household members are born on the island.

In the 1861 Census, Eliza is listed as the head of the household and is living with three males age 16-21, one 21-46, and her daughter Mary Ann. She states she is married but Patrick is not listed in the home.

The 1863 Lake Map Of Prince Edward Island for Lot 44 shows Mrs. Doyle's (not Patrick's) property on Souris Head perhaps Patrick has died or left the area.

On the 1880 Meecham Atlas page for Lot 44, shows the 70 acres Doyle farm split up and divided into separate lots owned by John and Richard Doyle. In the book, Ten Farms Become a Town there is a reference from the Leard papers that states that the original log cabin built by Patrick on his property in Lot 44, was occupied by his grandson John Doyle and recently torn down in 1967.

UPDATE FROM PEI ARCHIVES: Note the "_" in the transcription represents area of loss along one side of the document.

There are two references from the Leard Papers Regarding Patrick: Item 006334 John Doyle Souris West Said March 9 1967 My grandfather was Patrick Doyle .. who built a log house at Souris West sheep pond it was just torn down this winter. He came here when there were only French here. .He married a Deagle. I cannot remember either of them. My father died in 1881 when I was only two years old He was John Doyle . and was married to Julie Peters d. of Wm. Peters.

Item 006340 Johnny Doyle said Jan. 19 1959 My father and I live in a house my great grandfather Patrick Doyle built. It is a log house, shingled over. In the attic the heavy rafters have wooden pins.

Patrick Doyle came here from Ireland. He had a compass and knew a bit about surveying and plotted out the levelest piece at Sheep pond and bought it... He was the first settler there. He brought $750_ 00 in gold (false bottom in his chest ) _d loaned most of it to the landlord from _hom be bought the land. Never got _ it back. The landlord wanted him to take _e full value in land offered _m a lot of farms but he had all the land he could use . refused Phonsie MacDonald's farm and Frank Deagles and other big acreages. (Doyles are the last farm before Phonsie McDonald) on the same side of the road).

ask our community of genealogists a question.
Sponsored Search by Ancestry.com
DNA Connections
It may be possible to confirm family relationships with Patrick by comparing test results with other carriers of his Y-chromosome or his mother's mitochondrial DNA. However, there are no known yDNA or mtDNA test-takers in his direct paternal or maternal line. It is likely that these autosomal DNA test-takers will share some percentage of DNA with Patrick: 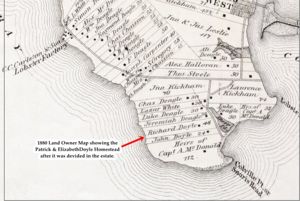 Morgan (Hughes) Frazier
I am on the fringe of starting a PEI Doyle project for Patrick's Descendants. Feel free to contact me for further information and please check your DNA against mine. Just because we don't match if you feel that you are descended from Patrick don't be swayed, it happens : )
posted Jun 19, 2018 by Morgan (Hughes) Frazier