Dennis Driskell was born about 1660 in Kinsale, County Cork, Ireland. [1]

He married Hannah Holden and they were the parents of several children.

Dennis passed away in Somerset County, Maryland sometime after January 27, 1721 which is the date of his will. [2]

Children of Dennis Sr. and Honorah are:

Alternate information for their Children

Is Dennis your ancestor? Please don't go away!

ask our community of genealogists a question.
Sponsored Search by Ancestry.com
DNA Connections
It may be possible to confirm family relationships with Dennis by comparing test results with other carriers of his Y-chromosome or his mother's mitochondrial DNA. However, there are no known yDNA or mtDNA test-takers in his direct paternal or maternal line. It is likely that these autosomal DNA test-takers will share some percentage of DNA with Dennis: 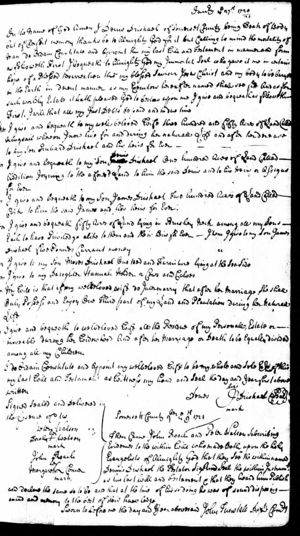